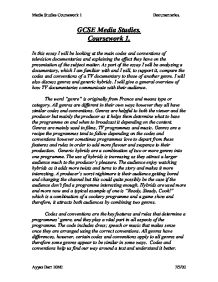 In this essay I will be looking at the main codes and conventions of television documentaries and explaining the effect they have on the presentation of the subject matter.

GCSE Media Studies. Coursework 1. In this essay I will be looking at the main codes and conventions of television documentaries and explaining the effect they have on the presentation of the subject matter. As part of the essay I will be analysing a documentary, which I am familiar with and I will, to support it, compare the codes and conventions of a TV documentary to those of another genre. I will also discuss genres and generic hybrids. I will give a general overview of how TV documentaries communicate with their audience. The word "genre" is originally from France and means type or category. All genres are different in their own ways however they all have similar codes and conventions. Genres are helpful to both the viewer and the producer but mainly the producer as it helps them determine what to base the programme on and when to broadcast it depending on the content. Genres are mainly used in films, TV programmes and music. Genres are a recipe the programmes tend to follow depending on the codes and conventions however sometimes programmes love to depart from these features and rules in order to add more flavour and suspense to their production. Generic hybrids are a combination of two or more genres into one programme. The use of hybrids is increasing as they attract a larger audience much to the producer's pleasure. The audience enjoy watching hybrids as it adds more twists and turns to the story and makes it more interesting. ...read more.

The narrator was a middle-aged American man and he consequently sounded convincing. Although I could not see the narrator I know this due to his accent and voice tone. He also sounded convincing and did not stutter in his speech. In this documentary there's live footage from 2pac's life, a few clips from his music videos and some clips from his time growing up. However, it is quite possible that these may not be original because we can't be sure that it was 2pac that was being filmed. This is because we have no evidence that 2pac looked as the footage in the documentary shows him. Interviews with his family, friends, colleagues, associates, fans and foes are all featured in the documentary and they all give their personal opinions of the rapper. Many of the interviewees claim 2pac was a man with a strong heart and someone who would give all he had for those he loved whereas some claimed he was heartless and looked for trouble and was addicted to drugs and his death was, unfortunately, inevitable. Throughout the documentary we are shown footage of where 2pac lived and grew up with a narrator describing his upbringing. Most of the shots used are establishing shots to show the surroundings so we can get a better feel for the area and the camera is focused at an eye level so we can see everything as though we were actually there. ...read more.

it and I will include some key characters in my cast who I feel will suit the role the best and present my information the way I'd like it to be presented. One thing I will be certain not to do is go astray from the topic and make sure I stay focused on the topic and produce all the necessary facts. One of the most important aspects of my programme will be the reaction people have to my production and how it makes them think about the topic. A possible subject matter could be the greenhouse effect. I could say what it is, why it is raising cause for concern and have a scientific conclusion to bring my production to an end. The main aim of a documentary is to inform and entertain the audience about the topic but a TV documentary is exciting and entertaining compared to reading the same information in a book. This is because we enjoy watching things; as Neil Postman once said, "We live in a visual world." I have learnt that documentaries have very different codes and conventions to other genre. Documentaries are there to inform the audience but different producers have different ways of portraying that information. Different documentaries are aimed at different age groups depending on the subject matter and different groups of people in general depending on the topic. Documentaries are the most enjoyable and entertaining way of educating and informing the audience. Media Studies Coursework 1 Documentaries. Ayyaz Darr 10M! 7/5/02 ...read more.