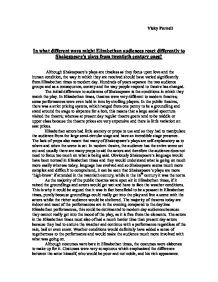 In what different ways might Elizabethan audiences react differently to Shakespeare's plays from twentieth century ones?

Vicky Purnell In what different ways might Elizabethan audiences react differently to Shakespeare's plays from twentieth century ones? Although Shakespeare's plays are timeless as they focus upon love and the human condition, the way in which they are received should have varied significantly from Elizabethan times to modern day. Hundreds of years separate the two audience groups and as a consequence, society and the way people respond to theatre has changed. The initial difference to audiences of Shakespeare is the conditions in which they watch the play. In Elizabethan times, theatres were very different to modern theatres; some performances were even held in inns by strolling players. In the public theatres, there was a strict pricing system, which ranged from one penny to be a groundling and stand around the stage to sixpence for a box, this means that a large social spectrum visited the theatre; whereas at present day regular theatre goers tend to be middle or upper class because the theatre prices are very expensive and there is little variation on seat prices. Elizabethan actors had little scenery or props to use and so they had to manipulate the audience from the large semi-circular stage and have an incredible stage presence. The lack of props also meant that many of Shakespeare's plays are self-explanatory as to where and when the scene is set. ...read more.

So today, if an audience was not enjoying a performance, they may leave in the interval or not give it a good personal review whereas in Elizabethan times the audience would participate in the play by expressing their views on how it was with physical actions or heckling. As Shakespeare's plays were written in the Elizabethan era, they followed the theories that were followed at the time; this would differ the way in which they viewed his work from modern audiences. A good example is the Great Chain of Being, which was a powerful visual metaphor for a divinely inspired universal hierarchy ranking all forms of higher and lower life it ranged from God, to each of the angels, to kings, knights, clerks, serfs, women, animals and finally inanimate things. This rigid hierarchy is mentioned in most of Shakespeare's plays and this would have made all of the material relevant to the audience. Another traditional theory that was followed was the 'four humours' this was about physiology and said that the state of a person's health depended upon a balance of the four elemental fluids: blood, yellow bile, phlegm and black bile; these fluid were believed to be allied with the four elements, air fire, water and earth. The humours apparently gave off vapours, which ascended to the brain; and an individual's characteristics would have been explained by his or her 'state of humours' as a perfect temprement could only be achieved when none of the humours dominated. ...read more.

While many of Shakespeare's characters can be called conservative (his lovers must be sanctified in the church, for example, in Romeo and Juliet; his duelers need to be dealt with by the government, and the children ought to listen to their elders) he found ways to have his plays and character's values broadly received, even capturing the interest of twenty-first century viewers with his sex and violence-filled plots, the current audience favours this kind of mixture of classic values and vulgarity. This blend of values also would have worked excellently in Elizabethan times due to the range of people attending; there was vulgarity for the lower classes and more morality for the upper class audience. The Elizabethans did not expect realism in anyway, the actors did not separate themselves from the audience by curtains and there were no sound effects of scenery to suggest realistically what they were describing; audiences even viewed boy actors playing women. Although the modern audience demands complex sound effects and scenery and costumes, usually in sumptuous theatres which can be works of art in their own; and many social differences exist between the two audiences, both the twenty-first century audience and the Elizabethan audience audience have a common attraction to Shakespeare's work- the power of the words and the passion of the performance. Shakespeare's plays have elements of realism, surrealism, love, greed, revenge and compel the audience whether his work is being read, or viewed regardless of the era in which the audience is from. ...read more.