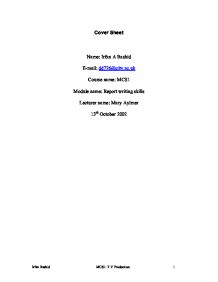 Insight to the public on how a television show is produced from the beginning stage, writing the script to the end, when editing the show. The essential part of this report in concerned with the production process as well as the equipment.

Cover Sheet Name: Irfan A Rashid E-mail: dd726@city.ac.uk Course name: MCS1 Module name: Report writing skills Lecturer name: Mary Aylmer 13th October 2002 Abstract The main aim of this report was to give an insight to the public on how a television show is produced from the beginning stage, writing the script to the end, when editing the show. The essential part of this report in concerned with the production process as well as the equipment. The conclusion states that there is far more detail and personnel involved in the production of the show and the fact that it varies between genres. Table of contents TOC \o "1-3" COVER SHEET 1 ABSTRACT 2 INTRODUCTION 3 PRODUCTION PROCESS 3 PERSONNEL 4 EQUIPMENT AND FEATURES USED 5 Camera 5 Lighting 5 Sound 6 Editing 6 CONCLUSION 7 Introduction Many people regard producing a television show is simple because they think of a camera and a few actors or presenters. This report extends the misinterpretation and progresses into detail on how to produce a show. The structure of this report will firstly outline the production process and then focus on the individuals used into creating the show including writers and directors. The final part of this report will take into account the physical aspects needed to crate the show for example the sound department and camera operators. T.V PRODUCTION Production process There are typically three parts to the production process: preproduction, production, and postproduction. A commonly used phrase in television production is: "the most important phase in production is preproduction." ...read more.

There are many different people involved in the production process and this can vary between productions. Some of the others that may be involved include a lighting director, a set designer, a make-up artist, and a wardrobe director. There are also camera operators. These people not only operate the cameras, but they also have to ensure that the cameras are set up properly and ensure their technical quality. They work with the director, lighting director and audio technician (this person sorts out the recording equipment, sets up and checks microphones, checks the audio quality etc.., to help set and shoot each shot. Television production requires planning before the production process begins. In making a production there are many things that can to be considered. The purpose of the production needs to be identified, as well as the goals, and there can more than one goal. The purpose of this would be to evaluate success. And there can more than one goal. Depending on whom the program is targeted at, the content of the production will vary. Factors such as age, sex, educational level, etc... are also things that should be considered. It is important to determine the basic value of a production. in terms of gain or return on the investment. Developing a production schedule is important to ensure deadlines are reached and so that the production isn't left out. Selecting the key production personnel, such as the production manager and the director also needs to be done. ...read more.

audio tone on all audio tracks. The purpose of these is to set a proper colour balance and audio and video levels for the videotape playback. Then there is the slate (for example, this is the thing that they hold and say 'take1' with.) This is recorded on a camera and has the following program information on it, which is read out: * Title of the program * The episode title (if relevant) and number * The date (and maybe recording VCR number) * The audio format (mono, stereo, surround sound designation etc...) * The presence of closed captioning or extra data After this comes precisely two seconds of a silent, blank (black) screen followed by the program. Using this enables the film to be loaded at the exact time that it's needed. Finally, once the program is completed, it is a network specification that there is five minutes of black screen and silence with a continuous time code after the final scene. Conclusion The aim of this report was to inform the reader on how a television show is made. In the introduction it stated that producing a television show, was simple this was obviously not the case as there is far more detail and effort needed. This may not be an accurate example of how a television show is made because it will vary through the different types of show. For example, Channels 4's reality show Big Brother would not need writers. To improve this article I would carry out interviews with the broadcasting team to further the detail of the article. Irfan Rashid MCS1: T.V Production 1 GE ...read more.