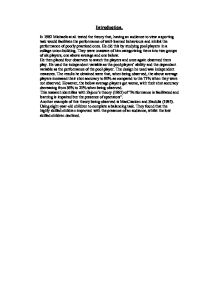 Investigate the effects of an audience being present during a sporting task.

Introduction. In 1982 Michaels at al. tested the theory that, having an audience to view a sporting task would facilitate the performance of well-learned behaviours and inhibit the performance of poorly practiced ones. He did this by studying pool players in a collage union building. They were unaware of him categorizing them into two groups of six players, one above average and one below. He then placed four observers to watch the players and once again observed them play. He used the independent variable as the pool players' ability and the dependant variable as the performance of the pool player. The design he used was independent measures. The results he obtained were that, when being observed, the above average players increased their shot accuracy to 80% as compared to the 71% when they were not observed. However, the below average players got worse, with their shot accuracy decreasing from 36% to 25% when being observed. This research identifies with Zajonc's theory (1965) of "Performance is facilitated and learning is impaired but the presence of spectators". Another example of this theory being observed is MacCracken and Stadulis (1985). Using eight-year-old children to complete a balancing task. ...read more.

I made sure that the right to withdraw was fully outlined in the consent form, which each participant signed. The participants were put under no pressure to either keep their results as part of the study or to withdraw them. This "Right to withdraw" option was also available at any time during or after the experiment was completed. Participants The target population for this experiment were the girls from Dame Allan's school in Newcastle, aged between 16 and 18 who had previously had only limited netballing experience (only compulsory physical education lessons), and netball players aged between 16 and 18 who represent Tyne and Wear county, playing netball. The sampling method used was that of opportunity sampling, 40 people were asked (10 of each ability) to take part, therefore gaining a sample of 20 participants from my study. I chose this sampling method as participants had to be willing and able to take part in this study. It was inexpensive and quick to select them and also the parent population of the Tyne and Wear netball County under 18 squad is limited to 20 people so therefore a method of stratified sampling could have proved difficult. ...read more.

However, there were some anomalous results, not all of the experienced players performances improved, one experienced players score decreased from 3 scored in condition A, to 2 in condition B and another was 5 shots decreasing to 3. Indeed some of the non-expert players scores increased, From 1 to 3 in condition B. Some scores stayed the same in both conditions, most notably with the experienced players, 2 of them scored 5 shots in each condition, however this also happened with the non-experienced players, but their equal scores were lower, 0 and 0 then 1 and 1. There was some overlap in the scores, in condition A, 7 non expert players scored equal or a better number of shots than that of the experts. Whilst in condition B, 3 non-experts scores were equal to that of their counterparts, the experts, however non were above. (See discussion for further reference). As a result of these values and averages, the null hypothesis can be rejected as there was a difference in the two sets of scores and the experimental hypothesis of, "It's predicted that there will be a difference in the performance (number of shots scored) with an audience present, or not, between experienced, well-practiced county level netball players and in-experienced non-netball players." Can be supported. ...read more.