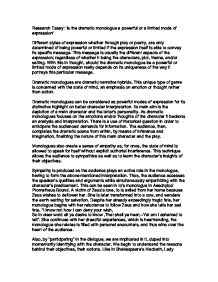 'Is the dramatic monologue a powerful or a limited mode of expression?'

A victim of Zeus's love, Io is exiled from her home because Zeus wishes to deflower her. She is later transformed into a cow, and wanders the earth waiting for salvation. Despite her already exceedingly tragic fate, her monologue begins with her reluctance to follow Zeus and how she tells her sad fate, "I know not how I can deny your wish, So in clear word all ye desire to know ,That shall ye hear;--Yet am I ashamed to tell". She continues with her dreadful experiences, which is heartrending, the monologue she relates is filled with personal encounters, and thus wins over the heart of the audience. Also, by "participating" in the dialogue, we are implicated in it, duped into momentarily identifying with the character. We begin to understand the reasons behind their objectives, their actions. Like in Shakespeare's Macbeth, Lady Macbeth as one of Shakespeare's most frightening female character. ...read more.

However, there are also drawbacks for the use of dramatic monologues. Disadvantages such as the incapability of being kept in the dark. For we need to keep in mind that even dramatic monologues, as autobiographical representation, cannot hope to capture everything in the scene as it is only the character's one point of view, and we have no knowledge of what the other characters' are thinking of. Just like "Emily of Emerald Hill", it shows the insights of a Peranakan woman's life, intriguing the audience's mind with her way of life and how different she thinks compared to non- Peranakans. Nevertheless, it is still very one sided and to the extent that the audience becomes jaded and uninterested for the very biased point of view in the monodrama. Therefore, I can conclude that dramatic monologues are powerful modes of expressions, with their vivid represent of the main character's point of view. Yet, if the monologue is carried out to such a great extent, such in Emily of Emerald Hill, it tends to become boring, leaving a bad impression. ...read more.