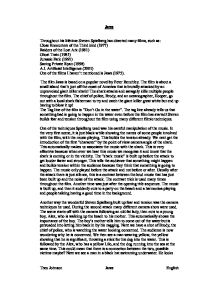 Jaws Throughout his lifetime Steven Spielberg has directed many films, such as: Close Encounters of the Third kind (1977) Raiders of the Lost Ark (1981) Ghost Train (1985) Jurassic Park (1991) Saving Private Ryan (1998) A.I. Artificial Intelligence (2001) One of the films I haven't mentioned is Jaws (1975). The film Jaws is based on a popular novel by Peter Benchley. The film is about a small island that's just off the coast of America that is brutally attacked by an unprovoked giant killer shark! The shark attacks and savagely kills multiple people throughout the film. The chief of police, Brody, and an oceanographer, Hooper, go out with a local shark fisherman to try and catch the giant killer great white but end up having to blow it up! The Tag line of the film is "Don't Go in the water". The tag line already tells us that something bad is going to happen in the water even before the film has started! Steven builds fear and tension throughout the film using many different filmic techniques. One of the techniques Spielberg used was his careful manipulation of the music. In the very first scene, it is just black while showing the names of some people involved with the film, with the music playing. This builds the tension already. ...read more.

He looks like the shark and the audience recognise this and start to get nervous, he is not a shark. A swimmer then bumps into the dog; this is a comedic moment, releasing the tension in the audience. In Brody's point of view we can see he is now talking to a local resident who is visiting the beach. The audience can see/feel Brody's frustration as we can only see part of the suggested attack zone. Still in Brody's point of view we see a woman in the sea scream. The audience automatically think it's another shark attack and as does Brody. It is not and Brody slumps back in his chair. After that we see a small child singing innocently while a man is calling for his dog. The audience realises that the dog may have been eaten by the shark, even more tension is build up as we fear for the dog's life. There is also a contrast between the panic of the man calling for the dog and the child singing. Next we are with the shark for the first time in the attack, as its point of view. The shark is swimming underneath people and we can only see the legs kicking. The audience even more fearful now as the attack is imminent and we are waiting for it to happen. ...read more.

Now because the audience is not expecting an attack anymore the actual attack on the boy - Alex - is even more terrifying and shocking than the original attack would have been. The plot/ storyline is used to build up tension and fear within the audience. The first two attacks are very close together, there is a so called 'cooling down' period for the audience. Sympathy for Brody and his family is gathered by the audience throughout this 'cooling down' time. This is because throughout the cooling down period the audience has become aware that Brody is worried not just for his family's safety but for the town's people's safety. Brody's son is involved in the third attack and the audience fears even more for Brody's son's safety. In the lat section of the film Brody, Hooper and the town's shark fisherman goes out on a boat to try and catch the shark. This is the first time we see the shark properly and realise its actual size. The audience are still quite sceptical of the shark's size until now. They start to wonder how Brody, Hooper and the shark-fisherman are going fare against the giant shark. Steven Spielberg has created a masterpiece using many filmic techniques. He has used them successfully to not only entertain, but build fear, tension and horror at many parts throughout the film. I personally think that the high point of tension in the film was when the little fishing boat was being attacked by the monster shark. Theo Johnson Jaws English ...read more.