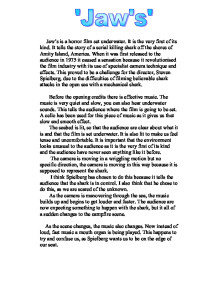 Jaw's is a horror film set underwater. It is the very first of its kind. It tells the story of a serial killing shark off the shores of Amity Island, America. When it was first released to the audience in 1975 it caused a sensation because it revolutionised the film industry with its use of specialist camera technique and effects. This proved to be a challenge for the director, Steven Spielberg, due to the difficulties of filming believable shark attacks in the open sea with a mechanical shark. Before the opening credits there is effective music. The music is very quiet and slow, you can also hear underwater sounds. This tells the audience where the film is going to be set. A cello has been used for this piece of music as it gives us that slow and smooth effect. The seabed is lit, so that the audience are clear about what it is and that the film is set underwater. It is also lit to make us feel tense and uncomfortable. It is important that the environment looks unusual to the audience as it is the very first of its kind and the audience have never seen anything like it before. The camera is moving in a wriggling motion but no specific direction, the camera is moving in this way because it is supposed to represent the shark. ...read more.

The sea is supposed to look attractive like its sparkling in the moonlight and there is nothing to suggest there's a shark lurking in the sea. This presents a nice, calm and relaxing atmosphere. As the boy and girl are heading towards the sea you can notice a difference between the way both of them are moving. The girl is moving more steadily than the boy, as she is running and he is staggering. The boy is very drunk and clumsy, which makes him much slower than the girl. Spielberg has done this to let us know that something is bound to happen to one of them, as they are drunk. He's made the girl look more steadily compared to the boy to show us that the boy is completely out of control, and isn't very reliable at this specific moment. The girl runs into the sea and then dives further into it, by this time the boy has fell down a hill onto the beach. We can now see that the boy and girl are both separated. We know this because the director shows us by panning across from the girl who is in the sea and the boy who is lying on the beach. When the girl dives into the sea it looks attractive and there is nothing to suggest that there's a monster lurking in there. ...read more.

The girl is being pulled under the water by the shark, which might make us think she is drowning instead of being eaten by the shark. She has very violent movements during the attack. This is worrying for the audience and makes us feel helpless. During the attack the camera flicks back to the boy who is slumped on the beach. At this point we cannot hear the girl screaming all we can hear is the buoy ringing. This tells us that the girl is never going to be saved. At the end of the attack the girl just disappears. This is shocking for the audience because it is like she was never there in the first place. The scene ends back with the boy on the beach and all you can hear is the waves lapping in the background. We can also see the sun starting to rise this represents a new day and a new start for the boy but not for the girl. The first ten minutes of the film has a huge effect on the audience it leaves them gripped to the rest of the film. They will also be wondering what will happen next and whether the shark strikes again or not. The director wants this to happen because he wants them to be on the edge of their seats through out the play and wants them to be feeling anxious. ...read more.