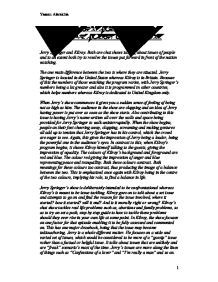 Jerry Springer and Kilroy. Both are chat shows talking about issues of people and to an extent both try to resolve the issues put forward in front of the nation watching.

JERRY SPRINGER Vs KILROY MEDIA ENGLISH COURSEWORK Jerry Springer and Kilroy. Both are chat shows talking about issues of people and to an extent both try to resolve the issues put forward in front of the nation watching. The one main difference between the two is where they are situated. Jerry Springer is located in the United States whereas Kilroy is in Britain. Because of this the numbers of those watching the program varies, with Jerry Springer's numbers being a lot greater and also it is programmed in other countries, which helps numbers whereas Kilroy is dedicated to United Kingdom only. When Jerry's show commences it gives you a sudden sense of feeling of being not as high as him. The audience in the show are clapping and an idea of Jerry having power is put over as soon as the show starts. Also contributing to this issue is having Jerry's name written all over the walls and space being provided for Jerry Springer to walk uninterruptedly. When the show begins, people on their feet cheering away, clapping, screaming and making gestures all add up to tension that Jerry Springer has in his control, which the crowd are eager to see. Again, this gives the impression of Jerry being a leader, being the powerful one in the audience's eyes. In contrast to this, when Kilroy's program begins, it shows Kilroy himself talking to the guests, giving the impression of equality. ...read more.

Jerry's has his audience in one part and his guests who he focuses on along with the audience. The seating arrangements are all in linear form, enabling all of eyes of the audience being able to see the guest, making them feel uncomfortable, attempting to provoke the guest in a particular manner. As well as being linear, the audience is on a sort of step platform, so all of the audience can look down upon the guest, once again with the intention of feeling greater than the other. Kilroy on the other hand has a smaller group for an audience. This audience is set out in a circular/ball style form. This is knowingly done to make the guest feel more at ease and comfortable, a sense of unity and protection. It also gives a sense of equality amongst all as Kilroy himself is in the group talking in the manner most appropriate for that time. Having the studio set out in this way relaxes the guest and makes them open up more. Because the viewers are smaller and are closer together on stage, Kilroy does not have to move around much, thus being no major distraction or any ruining the flow of the program. The clothing worn in both the shows have significance. Kilroy's chat show has Kilroy wearing a smart and simple suit, whilst his audience are all appropriately dressed wearing similar clothes to Kilroy himself. This gives a sense of equality amongst the whole group. ...read more.

A lot of research has gone in to this. Kilroy's program is during a morning period. This is done intentionally because mainly at that time there are appropriate viewers for that show. An obvious example being, "Are unemployed mothers entitled to benefits." This would be appropriate timing for the show as an unemployed mother would most likely be at home at the time the program is showed and therefore, her being in the situation she is, would attract her deeply in to the program. Because Jerry Springer is more laid back and more of an entertainer than an informer it is programmed to be televised after work hours. Where viewers of the show have come back from work, or an outing, and to relax, and have a laugh, they first show that they would see on would be Jerry Springer which would be a change in the day they have just had which was boring in contrast to the show which is meant to be involving and exciting. After reviewing both shows in great detail it is easily declarable what program is suitable for what type of viewer. Kilroy is a serious issue-debating program, which can help in situations, you may be in or which may be of interest to you. It is more realistic, and life based than Jerry Springer which is for the laid back viewers who would prefer to have a laugh and prefer "gossip" issues instead of issues that matter. Basically, if you want to laugh at something, Jerry Springer. If you want to be on the more slightly educational side, then Kilroy it is for you. Yaseen Alarakhia 1 ...read more.