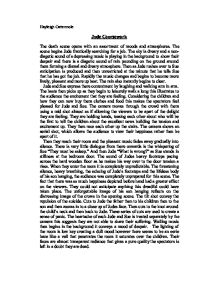 Jude - The death scene opens with an assortment of moods and atmospheres.

Hayleigh Cattermole Jude Coursework The death scene opens with an assortment of moods and atmospheres. The scene begins Jude frantically searching for a job. The sky is dreary and a non-diagetic sound of a depressing music is playing in the background to show their despair and there is a diagetic sound of rain pounding on the ground around them forming a dismal and dreary atmosphere. Then as Jude rushes over to Sue anticipation is produced and then unrestricted at the minute that he tells Sue that he has got the job. Rapidly the music changes and begins to become more lively, pleasant and more up beat. The rain also instantly begins to clear. Jude and Sue express there contentment by laughing and walking arm in arm. The haste then picks up as they begin to leisurely walk a long this illustrates to the audience the excitement that they are feeling. Considering the children and how they can now buy them clothes and food this makes the spectators feel pleased for Jude and Sue. ...read more.

The threatening silence, heavy breathing, the echoing of Jude's footsteps and the lifeless body of his son hanging, the audience was completely unprepared for this scene. The fact that there was so much happiness depicted before hand had a greater effect on the viewers. They could not anticipate anything this dreadful could have taken place. The unforgettable image of his son hanging reflects on the distressing image of the crows in the opening scene. The tilt shot convey the repulsion of the suicide. Cuts to Jude the father then to his children then to the son and then zooms in to a close up of Judes face. Then cuts to the knot around the child's neck and then back to Jude. These series of cuts are used to create a sense of panic. The heartache of each Jude and Sue is treated separately by the camera this suggests they are not able to share their suffering. Wailing music then begins in the background it conveys a mood of despair. ...read more.

Even at the funeral the audience is aware of how secluded they are from each other. There is an obvious visual distance between them as they stand by the graveside. The camera uses aerial and distance shots to gap the audience from the mourning. We can only be observers, outside the feeling of Jude and Sue. Significantly the only close up shot is that of which spotlights on the vicar as he says, "We are made the filth of the world, off scouring of all things." This is quite ironic because the vicar is quite repulsive and he is not a very religious looking person and here he is talking about three innocent children being the filth of the world. The mockery is not missed on the audience because aerial shots and tracking shots have before been exposed of these three tiny coffins masked by white sheets. The white clearly is being used to signify purity. And yet the vicar is referring to them as filth. And the audience are made aware of the duplicity of the church that makes us unconvinced of Sue's feelings of blame. ...read more.