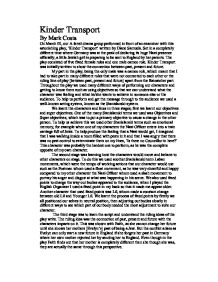 Kinder Transport By Mark Costa On March 01, our A-level drama group performed in front of an examiner with this astonishing play, 'Kinder Transport' written by Diane Samuels. Set in a completely different time where Germany was at the peak of declaring its huge Nazi presence officially, a little Jewish girl is preparing to be sent to England by her parents. The play consisted of five fixed female roles and one male cameo role. Kinder Transport was initially written to show the connection between past, present and future. My part in the play, being the only male was a cameo role, which meant that I had to take part in many different roles that were not connected to each other or the ruling line of play [between past, present and future] apart from the Ratcatcher part. Throughout the play we used many different ways of performing our characters and getting to know them such as using objectives so that we can understand what the character was feeling and what he/she wants to achieve in someone else or the audience. To help us perform and get the message through to the audience we used a well-known acting system, known as the Stanislanski system. ...read more.

The third stage was to learn the script and understand the ruling ideas of the play write. The ruling idea was the connection of past, present and future with the characters impacts on it. This was shown with Faith, as she cannot change her future until she knows her mothers [Evelyn's] past of being a Jew. But the conflict arises as Evelyn can only start a new future in England if she forgets her past in Germany where her own mother rejected her by sending her to England. Even though in the play Faith finds out that her mother is completely different then she though she was, they are actually the same through this perspective. The play write has decided the ruling idea and could not have been changed by the director, but to be worked within. The past, present and future was dramatised simultaneously on stage with the help of lighting effects to flip backwards and forwards between stages to make it clearer to the audience. The past and present were also shown within the actor's fixed positions and the way the actors produced them selves through the way they spoke. ...read more.

As we were going through the stages of learning the ruling idea of the play, we were given homework, which asked that if our parents have ever did what their parents did, and said they wouldn't. This was important in the play as Evelyn was repeating the mistakes Helga made, by pushing her away. Our entire group decided that we needed some background knowledge on what exactly our characters would be feeling with this kind of story, so we all went to watch a documentary inspired on the play, titled, 'In To The Arms Of Strangers'. This was an amazing documentary, hard to match with the play. We learnt another theme that the play uses for its ruling idea, memory. Memory was used in the play with Evelyn, whom wanted to forget her past, but her past could only be forgotten once she could face it. The writer of the play, Diane Samuels decided to write this play for many of the themes we used. She was however inspired by someone she knew whom portrayed Faith that dealt with the guilt of survival. It is also indicated that Diane was struck at how her parents passed down so fully to her, which was shown with Helga and Eva. Although this play was based on fictional characters, something like this happened to someone, somewhere. ...read more.