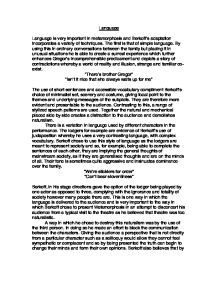 Language in metamorphosis by Berkoff

Language Language is very important in metamorphosis and Berkoff's adaptation incorporates a variety of techniques. The first is that of simple language. By using this in ordinary conversations between the family but placing it in unusual situations he is able to create a surreal experience which further enhances Gregor's incomprehensible predicament and depicts a story of contradictions whereby a world of reality and illusion, strange and familiar co-exist. "There's brother Gregor" "Isn't it nice that she always waits up for me" The use of short sentences and accessible vocabulary compliment Berkoff's choice of minimalist set, scenery and costume, giving focal point to the themes and underlying messages of the subplots. They are therefore more evident and presentable to the audience. Contrasting to this, a range of stylized speech patterns are used. Together the natural and mechanical placed side by side creates a distraction to the audience and demolishes naturalism. There is a variation in language used by different characters in the performance. ...read more.

A way in which he chose to destroy this naturalism was by the use of the third person. In doing so he made an effort to block the communication between the characters. Giving the audience a perspective that is not directly from a particular character such as a soliloquy would allow they cannot feel sympathetic or complacent and so by being presented the truth can begin to change their minds and form their own opinions. Berkoff also believes that by showing the audience the suffering of Gregor on stage they can therefore avoid it themselves. "As Gregor Samsa awoke one morning from uneasy dreams" "He found himself transformed into a gigantic insect" "His numerous legs, which were pitifully thin..." Another technique used in doing this through means of language is the use of direct address. This appears in individual speeches, called soliloquies. Unlike the use of the 3rd person, the audience is able to feel sympathy or shock in response to the words delivered by a particular character. ...read more.

It also emphasizes the issue of time, for Gregor it slowly ticks by, as if in some effect not moving on. This in turn, once again, exemplifies the isolation and loneliness he feels. It is used quite mechanically with the family mimicking actions of their domestic life in time to the ticking. They are described in the stage directions as wax works, perhaps to suggest that without Gregor's presence in the family as a money maker they are in some way living an artificial existence with no purpose but to throw orders at Gregor. The use of rhythm allows language to exist in the form of a variety of monotonous orders and needs. They family chant in a paced chant Gregor's meaning to them. "Gregor" "Cash" Gregor" "Shoes" Language plays an important role in constructing the different types of characters, a sense of time and a variety of dramatic techniques encouraging audience response. ...read more.