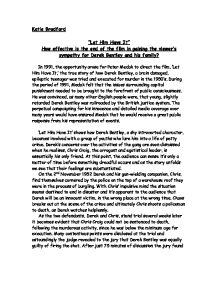 &quot;Let Him Have It&quot; How effective is the end of the film in gaining the viewer's sympathy for Derek Bentley and his family?

Katie Bradford "Let Him Have It" How effective is the end of the film in gaining the viewer's sympathy for Derek Bentley and his family? In 1991, the opportunity arose for Peter Medak to direct the film, 'Let Him Have It,' the true story of how Derek Bentley, a brain damaged, epileptic teenager was tried and executed for murder in the 1950's. During the period of 1991, Medak felt that the issues surrounding capital punishment needed to be brought to the forefront of public consciousness. He was convinced, as many other English people were, that young, slightly retarded Derek Bentley was railroaded by the British justice system. The perpetual campaigning for his innocence and detailed media coverage over many years would have ensured Medak that he would receive a great public response from his representation of events. 'Let Him Have It' shows how Derek Bentley, a shy introverted character, becomes involved with a group of youths who lure him into a life of petty crime. Derek's concerns over the activities of the gang are soon dismissed when he realises, Chris Craig, the arrogant and egotistical leader, is essentially his only friend. At this point, the audience can sense it's only a matter of time before something dreadful occurs and as the story unfolds we see that their feelings are substantiated. On the 2nd November 1952 Derek and his gun-wielding companion, Chris, find themselves cornered by the police on the top of a warehouse roof they were in the process of burgling. With Chris' impulsive mind the situation seems destined to end in disaster and it's apparent to the audience that Derek will be an innocent victim, in the wrong place at the wrong time. Chaos breaks out at the scene of the crime and ultimately Chris shoots a policeman to death, as Derek watches helplessly. As the two defendants, Derek and Chris, stand trial several weeks later it becomes evident that Chris Craig could not be sentenced to death, following the murderous activity, since he was below the minimum age for execution. ...read more.

Apart from that, there is total silence. The audience try to emphasise with him and try to understand the pain that he is going through. In the film when Derek is dictating a letter for his family he starts to sound much more cheerful than usual and even makes some jokes. His voice seems happier and he starts to smile. All of a sudden he becomes aware of the reality of his situation. His speech turns quicker, more emotional and with frequent stammers. His voice also becomes stern and abrupt as the anger within him takes over. The audience understand his fury, as this innocent child is being punished for a crime, which he did not commit. For the last part of 'Let Him Have It' the clock is extremely symbolic. At every available chance the audience hear it ticking to remind them of Derek's execution. The music played turns softer and gentler as his death approaches. Tears are heard almost continually in the last few minutes of the film from numerous people, as the emotion accumulates. As Derek says his final prayers he becomes quieter and slower as his execution draws nearer. The background noises become noticeable so the audience can tell that the equipment is being prepared. This causes a lot of tension and anxiety. On the scene of Derek's execution there seems to be a lot of commotion. The audience try and sympathise with Derek at his time of need, when he is brought to his death place. A mask is quickly put over his head and the sound of his intense breathing is exaggerated for the audience to create a dramatic effect. We can hear the rustling of bolts as they are being unscrewed and then the sudden drop of Derek's body. All at once there is complete silence. The sombre mood builds up emotion for the audience and soft music is played in the background to coincide with the effect. In Derek's home the mood is just as emotional. ...read more.

The immensity of this room is shown by the arrangement and complexity of different camera angles. The audience start to emphasise with Mr Bentley as it creates the feeling of isolation; such a small and bewildered man compares to the size of the hallway. 'Let Him Have It' also uses editing to show the emotions of characters as others are speaking. In the film, when Derek is dictating a letter to one of the prison officers, the different shots make it possible to see both of them separately as Derek is speaking. We, as an audience, can see sympathetic expressions from the officer, and we start to realise how Derek's presence has an immediate affect on how people perceive the case. Suspense and anticipation are also the result of specific editing. Near the end of the film there are a number of scenes with a very short time duration, which keeps the audience alert and creates excitement in the conclusion. Tension increases as the shots keep skipping from two different sets. This is shown in the film as Derek is saying his prayers prior to the execution. The film continually goes back to the scene of Derek's grieving family, so that the audience can see what two groups of people are doing at the same time. The emotion accumulates for the viewers as they watch how the family deals with the situation alongside Derek's terror and loneliness. As Derek's execution is approaching, the film frequently cuts to the scene of a ticking clock. This is a very important symbol of Derek's remaining life and it makes the audience more enthralled in the rest of the film. 'Let Him Have It' is a brilliant reconstruction of the real life case of Derek Bentley. Peter Medak, the director, successfully portrays the innocence of a brain-damaged teenager by showing a legal system less concerned with justice than proving itself correct. Medak secures the audiences sympathy for Derek Bentley by creating an emotional and compelling interpretation of events. ...read more.