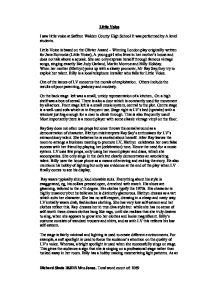 Little Voice - I saw little voice at Saffron Walden County High School It was performed by A level students.

Little Voice I saw little voice at Saffron Walden County High School It was performed by A level students. Little Voice is based on the Olivier Award - Winning London play originally written for Jane Horrocks (Little Voice), A young girl who lives in her mother's house and does not talk above a squeak. She can only express herself through famous vintage songs, singing exactly like Judy Garland, Marlin Monroe and Billy Holiday. When her mother (Blethyn) joins up with a sleazy promoter, Mr Ray Say,they try to exploit her talent. Billy is a local telephone installer who falls for Little Voice. One of the issues of LV concerns the morals of exploitation. Others include the results of poor parenting, jealousy and modesty. On the back stage left was a small, untidy representation of a kitchen.. On a high shelf was a box of cereal. There is also a door which is constantly used for movement by all actors. Front stage left is a small music system, central to the plot. ...read more.

Billy's costume consists of standard trousers and shirts, and as with LV this reflects his low self-esteem. The stage is fairly minimal and lighting is used to create different environments. For example, a soft spotlight is used to focus the audience's attention on the quality of LV's voice. Whereas, a bright spotlight is used when she successfully sings on stage. This gives the audience a sign that she is singing on a professional stage rather than tucked away in her room. Billy has a hobby making mesmerizing light patterns. As an audience we are kept in suspense. He frequently asks LV to come out and see them but she has insufficient confidence. As the story reaches a climax she agrees to go, despite her mother's refusal and we witness her seeing her own name in lights. Strobe lighting is also occasionally used to create impact. Most important in this play is the sound of LV's record collection. This is central to the play. It is around the singers' voices that the role of LV is cast. ...read more.

LV is monotonal and monosyllabic which symbolises her repressed personality. LV uses small movements to demonstrate shyness and nervousness. Her personality is "on the edge" when she habitually sits on the edge of the sofa. This is in complete juxtaposition to her mother who uses expansive and demonstrative language and actions. Blethyn constantly overemphasises her own femininity by wriggling and pouting in a girly way. This contrasts with LV's comparative immobility .LV infrequently uses tight, restricted movements compared to Blethyn's extensive gestures which shriek of immaturity. The play has several social comments to make. It portrays a lower-class one-parent family struggling to make a decent living. The 70s was a colourful decade with a theme of emancipation of women, increased access to education and a free society. It seems that this has not affected LV unfortunately, but Blethyn appears to be making the most of it. This feels uncomfortable to the audience until it is reversed at the finale. I personally enjoyed this performance. I thought the lighting and staging made an excellent addition to the quality of the production. LV's singing was spectacular and made the show a worthwhile experience. Richard Slade 10JDB Mrs Jones. Total word count of: 1089 ...read more.