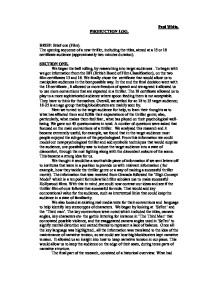 Paul White. PRODUCTION LOG. BRIEF: Brief one (Film). The opening sequence of a new thriller, including the titles, aimed at a 15 or 18 certificate audience (approximately two minutes duration). SECTION ONE. We began the ball rolling, by researching into target audiences . To begin with we got information from the BFI (British Board of Film Classification), on the two film certificates 15 and 18. We finally chose the certificate that would allow us to manipulate audiences in the best possible way. In the end the final decision went with the 18 certificate , It allowed us more freedom of speech and we agreed it allowed us to use more conventions that are expected in a thriller. The 18 certificate allowed us to play to a more sophisticated audience where spoon feeding them is not acceptable. They have to think for themselves. Overall, we settled for an 18 to 35 target audience; 18-35 is an age group that big blockbusters are mainly seen by. Next we turned to the target audience for help, to learn their thoughts as to what has affected them and fulfils their expectations of the thriller genre; also, particularly, what makes them feel fear , what has played on their psychological well-being. We gave out 40 questionnaires in total. A number of questions were asked that focused on the main conventions of a thriller. We analysed this research and it became extremely useful, for example, we found that in the target audience most people enjoyed the sub genre of the psychological. ...read more.

Furthermore, a font analysis of text took place for the main titles along with colour connotations to see what added a more psychological feel to the film. SECTION THREE. The filming schedule consisted over two days, but only took one due to the weather and situation. Our first filming session began going against the chronological order of the film . With the perfect lighting status for a great morning shot we began to capture the footage we required. We encountered little problems on the first shooting session. However, in hindsight, we encountered a problem with continuity, not noticed during the shooting process but later in the editing suite. The fault occurs when the empty handed main protagonist picks up his bag, yet as the door opens moving into the next scene he has bag plus papers in his hand. Furthermore, another small setback that was encountered in the first filming session is where the main protagonist walks towards his car and the joyful old women walks by and shouts 'MORNING'. The problem, was that the car was in the wrong direction for the action to take place. We overcome this problem by noticing that the car was a distance from the house. We gave the old lady a new super objective- a charity leaflet to deliver. The second filming session incorporated the interior settings of the main protagonists house. This proved successful as, the room had great semiotic value due to the messy connotations. The room symbolized two sides to the protagonist's character, one of messiness and unruliness, that signifies a possible menace, and the white walls that connotate hope and purity The overall look of the room helped to build audience expectations of the character. ...read more.

The music had a fast beat which connotated the heart beating fast. The heavy sadistic breathing connotated that someone was following the main protagonist and all is not well. It helped immensely to build on the audience's fears . The second piece of music is where the main protagonist is doing his morning business. The music played is by 'The Doors' and is entitled 'People are Strange'. This eerie, 'chilly' music is in a sense quite subversive and helps to provide a pointed contrast to the main protagonist's apparently 'normal' life, and it allows the audience an insight into how the main protagonist may act. With this comical rock music present, it plays as a red herring for the final shock to the audience. With this red herring present, the audience are now lured into this false sense of security, were everything is ok. As time goes on a narration begins that again confuses the audience , into the idea that everything seems ok, but what if the narrative voice over is true. The narration ends with, 'his dreams are eating him away'. The audience expects something to happen. But as a final psychological reversal another red herring is used within the old women who joyfully shouts morning to the main protagonist. The audience are then shocked by the protagonist's wrath and anger with the word 'FUCK OFF'. The audience laugh in fear and discomfort . This is also a good example of the alienation technique, associated with the theatre of the absurd, to which I referred earlier. Overall the psychological thriller genre is met. Destiny fulfilled ! 2523 words. ?? ?? ?? ?? ...read more.