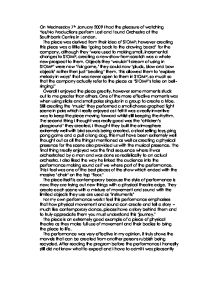 On Wednesday 7th January 2009 I had the pleasure of watching Yes/No Productions perform Lost and Found Orchestra at the Southbank Centre in London.

The piece was derived from their idea of STOMP; however creating this piece was a little like ‘going back to the drawing board’ for the company, although they ‘were used to making small, incremental changes to STOMP, creating a new show from scratch was a whole new prospect to them. Objects they ‘wouldn’t dream of using in STOMP’ were now ‘fair game,’ they could now ‘pluck, blow and bow objects’ rather then just ‘beating’ them. This allowed them to ‘explore melody in ways’ that was never open to them in STOMP, so much so that the company actually refer to the piece as ‘STOMP’s take on bell-ringing!’

Overall I enjoyed the piece greatly, however some moments stuck out to me greater than others. One of the more effective moments was when using sticks and small poles singular in a group to create a tribe. Still creating the ‘music’ they performed a small choreographed fight scene in pairs which I really enjoyed as I felt it was a really inventive way to keep the piece moving forward whilst still keeping the rhythm. The second thing I thought was really good was the ‘children’s playground’ they created, I thought they built the atmosphere extremely well with bird sounds being created, a stool selling toys, ping pong game and a pull a long dog, this must have been extremely well thought out as all the things I mentioned as well as creating a physical presence for the scene also provided us with the musical presence. The final thing I really enjoyed was the final sequence where it was orchestrated by a man and was done so realistically to an actual orchestra. I also liked the way he linked the audience into the performance making sound as if we where part of the performance. This I feel was one of the best pieces of the show which ended with the massive ‘choir’ on the top ‘floor.’

The piece itself is contemporary because the style of performance is new; they are trying out new things with a physical theatre edge. They create each scene with a mixture of movement and sound with the limited objects they use are used as ‘instruments’

For my own performance work I feel this performance emphasises that how physical movement and sound can create and tell a story – much like contemporary dance, pieces have a story behind them and to truly appreciate them you must understand this ‘journey.’

The piece is an extremely good example of a piece of physical theatre as they make full use of movement and their bodies to bring the piece to life.

The performance was very effective in my opinion, it truly shows the marvels that can be created from another persons rubbish being recycled. After reading the program before the performance I honestly still did not know what to expect and I have to admit I was pleasantly surprised, and that is great praise to the company what they have managed to make.

Dominic Cavendish from the Telegraph firstly analyses how society has changed, going from telling young children that ‘Giants’ and ‘Witches’ are evil to ‘Cars’ and Plastic Bags’ being the new evil ‘characters.’ This statement is over the top, but not as much so as people might expect. He states how he likes that the performance doesn’t preach to us over environmental issues, this I am in total agreement with, people should be left to enjoy a performance and if they are wanting to take action over the environment they will, a ‘preachy’ performance is far more likely to turn away the average person from watching and enjoying the piece. He then says how an ‘atmosphere of open-ended possibility and discovery sets in immediately,’ this I agree with as the first thing you notice when you sit down in your seat is the vast scale of the set, its contents and its layout. Throughout the whole piece we are taken on a journey of discovery, how objects we use in our everyday life can create melody and rhythm. He then says that ‘you are assailed by weird, wonderful and often surprisingly mellifluous sounds from all sides.’ This is true, especially for me, as the first time watching a production like this it fascinated me how they created the rhythm and melody. Finally he makes that comment that he feels that there ‘could maybe introduce a touch more incidental clownish comedy’ into the piece, I agree with this as sometimes small pieces seemed to drag on longer than they should and I feel some more small incidental clownish comedy would have solved this.

Overall I agree with this reviewer’s opinion that this is a ‘top-of-the-range treat.’

Geoff Brown from the Times Online firstly makes an observation of ‘how music is created.’ He comments on the bare bones of what we call music today, hitting two stones together or blowing down a hollow bone, something we might associate with pre-historic music! He mentions the major difference from this to S.T.O.M.P is that it also has melody with the rhythm created. He mentions how the first half of the show could be criticised for its lack of musical formulas – this I agree with because the first half did seem to get slightly repetitive and drag on towards the end. He highlights the ‘cast’s incredible feats of co-ordination and choreography’ and in agreement with this I have to sa of the stuff with breathtakingly accurate and seemed correct down the smallest detail. ‘Paul Emery’s lighting design adds additional pulses of colour, strong on triumphant reds, throbbing in step with the rhythm of the music’ this I agree added good effect to the piece and without it the performance may have lost some of its intrigued. He finally mentions the swinging aerialists, the droll, light-fingered comedy, or Mike Roberts’s crucial and intricate sound design – never once deafening, despite the amplification. This whole statement I completely agree with. He finally sums this up as the best Christmas treat and town, and I agree with him that this is a top class performance.

Kids grow up so fast these days. They’re barely scratching their names in their school-books before they’re solemnly advising you that it’s essential to save the planet by recycling more, or that a polar bear drowns every time you switch a light on. Giants and witches aren’t evil – cars and plastic-bags are. The air they breathe is perfumed with hints of impending apocalypse.

What I really like about Lost and Found Orchestra, the successor to Stomp – first seen at the Brighton Festival in 2005, now briefly installed at the Festival Hall – is that it doesn’t preach at its audience. In fact, not a word is spoken for two hours. While it provides an inspiring example of how to convert junk-heap odds and sods into ingenious instruments, there’s no hammering home messages about the environment. What you get is a joyous, high-decibel celebration of the power of noise and human invention.

Although a 40-strong choir has been drafted in to give the finale extra oomph, the show follows much the same scruffily entertaining course as it did back at its premiere, with 32 musicians – all of whom could pass, in their black casual dress, for street buskers – putting their improvised sonic wares through their paces. An atmosphere of open-ended possibility and discovery sets in immediately, with a quintet forming round a musician whose amplified gentle probings of a double-bass case builds into a percussive frenzy.

From then on, you are assailed by weird, wonderful and often surprisingly mellifluous sounds from all sides – with many of the musicians perched in scaffolded battlements. Drainpipes, plastic bottles, saws, Hoovers, bin-bags, tape-measures, a filing cabinet, a shopping trolley and even those retro toys space hoppers and whirlies, have all been recruited for the cacophonous carnival.

Most have got special names now – the one that went down best with my seven-year old son was the “plumpet”, fashioned from plumbers’ pipe attached to orange traffic cones. Highlight of the show has to be the aerial glockenspiel, with players trapezing back and forth in time to strike their chimes.

If there’s one criticism, it’s that one wishes that directors Steve McNicholas and Luke Cresswell had made everything as visually and choreographically co-ordinated at that. And they could maybe introduce a touch more incidental clownish comedy. Yet this still ranks as a top-of-the-range treat: forget about your carbon footprint for a blissful moment and go.

From the Times Online

How was music first made? Hitting two stones together, perhaps, or blowing down a hollowed bone. We’ve come a long way since caveman days, but Lost and Found Orchestra, the new extravaganza from Steve McNicholas and Luke Cresswell, the Brighton mavericks who created the worldwide phenomenon Stomp, are here to tell us that we haven’t.

Most orchestras at the Festival Hall play violins, clarinets, trumpets — instruments carved and polished into perfection. This bunch play traffic cones, plumbing pipes, watercoolers, bedsprings, hammers, saws, hospital intravenous stands, filing cabinet drawers, even the lowly dustpan and brush. Anyone who has seen Stomp during its transformations and travels since its debut in 1991 will recognise the show’s junk aesthetic. But Stomp, which is on stage in London at the New Ambassadors Theatre, settled into a show for eight performers. By my count, this lovely monster summons 34 (plus an added choir of 33), blowing, warbling, tapping and bashing over every level of the wide, scaffolded stage.

There’s another spectacular difference. Stomp was essentially a percussion show, celebrating rhythm. Here we have melody as well, or as much melody as is plausible if you’re playing the “plumpet” (plumbers’ piping plus traffic cone), a wok fixed with steel guitar strings, or the dreaded “squonkaphone”, a combination of piping, balloon and gate latch that specialises in sounding rude.

You could, if you wanted, criticise the first half for its restricted musical formulas. A rhythmic pattern is established, hewn out of rock or world music. A melody of the minimalist persuasion is constructed above, and repeated with changing densities as different instrumental exotica are wheeled on and off. Easy on the ears, but limiting heard in bulk.

Yet not even that famous music critic Ebenezer Scrooge could fault the cast’s incredible feats of co-ordination and choreography. Throughout, the performing army flexes and jigs in a non-stop ballet of gesture and movement, seemingly synchronised on the point of a pin. Paul Emery’s lighting design adds additional pulses of colour, strong on triumphant reds, throbbing in step with the rhythm of the music. And don’t forget the swinging aerialists, the droll, light-fingered comedy, or Mike Roberts’s crucial and intricate sound design – never once deafening, despite the amplification.

In the second half the musical diet is widened. Cresswell lopes on as conductor. The music-theatre grows more complex in structure, but never ceases being audience-friendly: think of Philip Glass plus the Penguin Cafe Orchestra, plus Warners’ cartoons, plus the Marx Brothers, plus that bizarre Hollywood fantasy of Dr Seuss, The 5000 Fingers of Dr. T. And even that fusion of music and mayhem won’t catch the crazy magic of this uplifting show – the best Christmas treat in town.