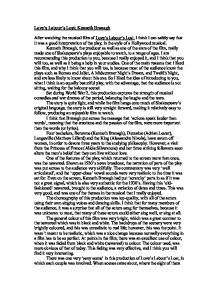 Love's Labour's Lost: Kenneth Branagh After watching the musical film of Love's Labour's Lost, I think I can safely say that it was a good interpretation of the play, in the style of a Hollywood musical. Kenneth Branagh, the producer as well as one of the stars of the film, really made one of Shakespeare's plays enjoyable to watch, to a range of ages. I am recommending this production to you, because I really enjoyed it, and I think that you will too, as well as it being a help in your studies. One of the main reasons that I liked this film, and why I think that you will too, is because most of the audience know the plays such as Romeo and Juliet, A Midsummer Night's Dream, and Twelfth Night, and are less likely to know about this one. So I liked the idea of introducing to you, what I think is an equally beautiful play, with the advantage, that the audience is not sitting, waiting for the balcony scene! ...read more.

This was very good, and was one of the themes in the musical that I really enjoyed. The choreography of this production was top-quality, with all of the actors using their own singing voices and dancing skills. I think that for many members of the audience, it was a surprise that all of the actors sang for themselves, because it was unknown to most, that many of these actors could either sing well, or sing at all. The general colour of this film was very bright, which was a great contrast to the newsreel which was in black and white. The backdrops of the scenery were very brightly coloured, and this was unrealistic to real life; however, this was the point. It wasn't meant to be realistic, which was a nice change because normally everything in a film has to be so perfect. At points in the film, there was an excellent use of colour, when it was faded from black and white (newsreel) ...read more.

He used the dancing patterns as like a flower opening and closing. Used for the last scene, the song 'The Way You Look Tonight' was very appropriate. As the four girls were flying off home in their plane, the men were standing beside the plane waving them off, until they were to return the following year. In four consecutive windows of the plane, was each girl, opposite her man. This was very good, because it made it seem individual for each couple but at the same time, the girls had been reunited as one group, and the men as another. So I think that you could gain a lot from watching this production; firstly for your studies, and secondly for your own pleasure. When I saw this a school, I did not think of it as something I had to watch, but as something that I would watch through my own choice; thus making Kenneth Branagh successful in his purpose - making one of Shakespeare's plays, into something that could be seen and enjoyed, by a range of ages. Word Count: 1032 ...read more.