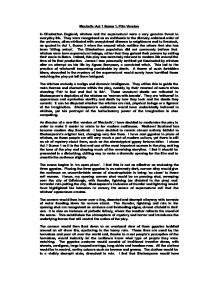 Macbeth: Act 1 Scene 1, Film Version In Elizabethan England, witches and the supernatural were a very genuine threat to everyday life. They were recognised as an antithesis to the divinely ordained order of the universe, often attributed with unexplained disease to neighbours and to livestock, as quoted in Act 1, Scene 3 when the second witch notifies the others that she has been 'killing swine'. The Elizabethan population did not commonly believe that witches were born supernatural beings, rather that they gained their powers by selling their souls to Satan. Indeed, this play was extremely relevant to modern life around the time of its first production. James I was personally terrified yet fascinated by witches after an attempt on his life by Agnes Sampson, a convicted witch. This led to the practice of witchcraft becoming punishable by death. A theme of such forbidden ideas, shrouded in the mystery of the supernatural would surely have horrified those watching the play yet left them intrigued. The witches embody a malign and demonic intelligence. They utilise this to guide the main themes and characters within the play, notably by their reversal of nature when chanting 'Fair is foul and foul is fair'. ...read more.

All the clothes would be in neutral, earthy colours such as browns and greens. The clothes would be in a visibly decrepit state, drenched in rain. I feel that Shakespeare would have depicted the three witches as ancient women and I agree in that the gypsies would not only be ancient but also incredibly hideous in their physical appearance. If young, beautiful actresses were used, the audience would not feel such apprehension and repulsion towards the gypsies and so the chilling mood of the scene would be diminished. As the camera sweeps down to a close-up of the first gypsy's face, she begins her initial incantation. With rain dripping off her face, the flickering flames illuminate one half of her face, while the other half remain dark like the night. This symbolism could represent the good and evil within each and every person (light and dark), the major theme of 'Macbeth'. ' When shall we three meet again, in thunder, lightning or in rain?' would be delivered with an intent gaze at her companions, and the nasal whine of an ancient woman. The camera would then cut to a 'worm's-eye view' of the scene, with the camera partially submerged in a deep puddle. ...read more.

This paradoxical phrase sums up the reversal of normal moral values that is the central principle of Satanism, the witches' 'religion'. It is also a central theme to the play, and Shakespeare has cunningly integrated a fundamental theme throughout his play with the ghastly practice of Satanism. In doing so he has left his audience in no doubt as to how dark and mystical this tragedy is. The small drop of doubt left in the audience's minds as to whether the witches are real or not enables Shakespeare to combine a vivid external presentation of the forces of evil with a profound exploration of their psychological sources and effects in the human mind. 'Hover through the fog and filthy air' is delivered in a slow, ominous moan. The gypsies are meant to disappear into thin air as directed in the text, but I feel it is much better to leave it up to the audience to decide if these women have supernatural powers. In order to allow this, the oil drum fire sputters wildly and, with another chilling bell chime, fades out in the torrential rain. The screen then becomes completely blank, finishing the scene and leaving the audience with the uncertainty as to what the gypsies truly are. ...read more.