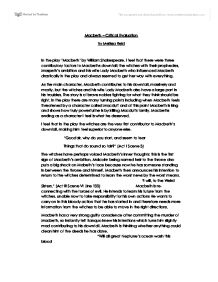 Macbeth - Critical Evaluation By Melissa Reid In the play 'Macbeth' by William Shakespeare. I feel that there were three contributory factors to Macbeths downfall; the witches with their prophecies, Maspeth's ambition and his wife Lady Macbeth who influenced Macbeth drastically in the play and always seemed to get her way with everything. As the main character, Macbeth contributes to his downfall, massively and mostly, but the witches and his wife Lady Macbeth also have a large part in his troubles. The story is of brave nobles fighting for what they think should be right. In the play there are many turning points including when Macbeth feels threatened by a character called Macduff and at this point Macbeth is king and shows how truly powerful he is by killing Macduffs family. Macbeths ending as a character I feel is what he deserved. I feel that in the play the witches are the very first contributor to Macbeth's downfall, making him feel superior to anyone else. ...read more.

Macbeth is thinking whether anything could clean him of the deeds he has done. "Will all great Neptune's ocean wash this blood Clean from my hand?" (Act II Scene II line 57) Macbeth here is worrying about the situation that he is in and wondering whether he will or won't get caught! Neptune being a roman God, the language is meaning he is wondering whether any amount of water could clean his hands from what he has done Lady Macbeth has just returned from King Duncan's death bed because Macbeth was silly enough to bring the dagger away from the crime scene, her hands are now also covered in blood physically and mentally, a knocking at the front gate startles them. Macbeth in Act III feels that there is more murders and crime to come, he is discussing with Lady Macbeth his intent to continue with his bloody course. "We are but young in the deed." ...read more.

Towards the end of the play Macbeth is expressing his reaction towards the death of Lady Macbeth and it is not the reaction you would expect from someone whose wife has just died. "She should have died hereafter;" (Act V Scene V) The relationship between Lady Macbeth and Macbeth is a very poor one throughout the whole play and deteriorates to the extent that he feels little for her death, when Seyton brings Macbeth the news of the death of his wife he does not react like a normal husband really should showing emotion, but in his opinion this day was coming and it would arrive very soon. Macbeth is the main contributor to his downfall but with the witches' prophecy being so unbelievable and then coming true and Lady Macbeth being so influential it's hard to go so mad all by yourself, these two sets of characters were also very influential toward his downfall. In my opinion Macbeths eventual downfall was caused by all five of those main characters. ...read more.