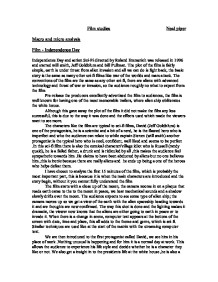 Film studies Neal piper Macro and micro analysis Film - Independence Day Independence Day and action Sci-Fi directed by Roland Emmerich was released in 1996 and starred will smith, Jeff Goldblum and bill Pullman. The plot of the film is fairly simple, earth is under threat from alien invasion and all we can do is fight back, the basic story is the same as many other sci-fi films like war of the worlds and mars attack. The conventions of the film are the same as any other sci-fi, there are aliens with advanced technology and threat of war or invasion, so the audience roughly no what to expect from the film Pre-release the producers excellently advertised the film to audiences, the film is well known for having one of the most memorable trailers, where alien ship obliterates the white house. Although this gave away the plot of the film it did not make the film any less successful, this is due to the way it was done and the effects used which made the viewers want to see more. ...read more.

The audience expects to see some type of alien ship; the camera moves up so we get a view of the earth with the alien spaceship heading towards it and are thoughts are now confirmed. The way this shot is done and the lighting makes it dramatic, the viewer now knows that the aliens are either going to earth in peace or to invade it. When there is a change in scene, computer text appears at the bottom of the screen with date, time and place, this all adds to the theme and genre, which is sci-fi. Similar techniques are used like at the start of the matrix with the streaming computer text. We are then introduced to the first protagonist called David, we see him in his place of work .Nothing unusual is happening and for him it is a normal day at work. This allows the audience to experience his life style and decide whether he is a character they like or not. We also get a insight in to the presidents life at the white house ,he is also a protagonist .we find out that he is married, has a young daughter, and is very young for a president which seems to be causing some problems. ...read more.

In the final sequence tension builds up thanks to the conventions of sci-fi and action films, when David and captain Steven upload the computer virus to the mother ship, we expect the film to come to a end because the alien defenses are supposedly down But when the US military attempt to shoot the alien ships, nothing happens. We think they have failed in their attempts to break the alien defenses but in the end it turns out the virus has worked and the alien defenses are down. More tension is then created simultaneously when the scene cuts to David and captain Steven who are stuck in the mother ship, as heroes they decide to blow the ship up with themselves still inside it, when they release the bomb to blow the ship up they are set free and are involved in a high speed chase with smaller alien ships, this type of scene is often associated with action films, this is the resolution of the film. In conclusion the film is typical of the sci-fi action genre and the audiences expectations are met by all the usual conventions of this type of film. ...read more.