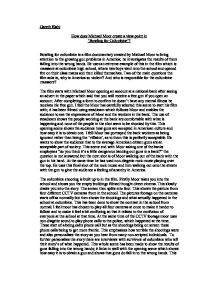 Gareth Elahi How does Michael Moor create a view point in 'Bowling for Columbine'? Bowling for columbine is a film documentary created by Michael Moor to bring attention to the growing gun problems in America; he investigates the results of them falling into the wrong hands. He uses an extreme example of this in the film which is massacre at columbine high school, where two boys went into the school and opened fire on their class mates and then killed themselves. Two of the main questions the film asks is, why is America so violent? And who is responsible for the columbine massacre? The film starts with Michael Moor opening an account at a national bank after seeing an advert in the paper which said that you will receive a free gun if you open an account. After completing a form to confirm he doesn't have any mental illness he receives his free gun. I feel the Moor has carefully selected this scene to start his film with; it has been filmed using steadicam which follows Moor and enables the audience to see the expressions of Moor and the workers in the bank. The use of steadicam shows the people working at the bank are comfortable with what is happening and none of the people in the shot seem to be shocked by this. This opening scene shows the audience how guns are accepted in American culture and how easy it is to obtain one. ...read more.

This following scene from this is a NRA pro gun rally held just days after the columbine shootings. This contrasting switch in scenes show insensitivity and represents the NRA in a bad way. Moor wants the audience to think this way about the NRA and Charlton Heston; he is show to be the villain as he is leading the rally. This scene gives a fly-on-the-wall perspective of the gun rally; it shows that the audience can see the true intensity of it. After this Moor shifts the attention to who is to blame for the columbine shootings. He shows a series of clips of individuals blaming Marilyn Manson, saying that because the killers listened to his music he is to blame. Then shows one of his music videos which shows why people may think that he is to blame. Marilyn Manson decides to do a concert in Littleton 2 years after the shootings the film shows how there were campaigns to stop his performance. Like the NRA rally this was shown using fly-on-the-wall filming so that the audience can see the first hand what happened, with out the presence of cameras. When Moor interviews Marilyn the film jumps between the interview and the protesting rally. Its helps the audience to sympathise with Marilyn as he is responding to what the protesters are saying and defending himself. Moor is sympathetic towards Marilyn the camera is at the same level to him and the interview is filmed using one camera. ...read more.

The teacher begins to cry which is when the words "from my cold dead hands" are used to bridge into another NRA rally. Moor uses these words as a leitmotif in the film for Charlton Heston and the NRA rally's. This again shows the insensitivity of the RNA and creates the view point that Charlton Heston and members of the NRA are bad, therefore guns are bad. Later in the film Moor meets two surviving victims of the columbine shootings, one of which is in a wheel chair. The entire time with them is filmed using direct cinema so that it personalises the story and shows that it is unscripted. Moor wants you to feel sympathy for the two boys as they are victims of gun crime, he again show the consequence of guns in the wrong hands. He takes them to K-mark head office to protest about the selling on ammunition in there shops. This is done to suggest to the audience that k-mark may be to blame as Eric and Dylan brought the bullets from K-mart. When his protests fail to reach anyone of any significance he goes to the closest K-mar and buys all the ammunition to show to the audience how easy it is to buy as much ammunition as you desire. One of the last shot of the film is of a K-mart spokes person saying that as of a few months K-mart will no longer sell ammunition. This shows the audience that they can make a difference and encourages them to do so. ...read more.