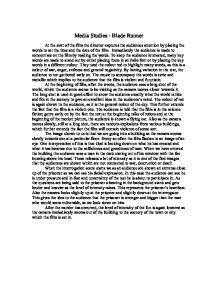 Media Studies - Blade Runner At the start of the film the director captures the audiences attention by placing the words to set the time and the date of the film. Immediately the audience is made to concentrate on the film by reading the words. To keep the audience interested, many key words are made to stand out by either placing them in an italic font or by placing the key words in a different colour. They used the colour red to highlight many words, as this is a colour of war, anger, evilness and general negativity. By having variation in the text, the audience to not get bored early on. The music to accompany the words is eerie and metallic which implies to the audience that the film is violent and futuristic. ...read more.

This further extends the fact that the film is a violent one. The audience is told that the film is in the science fiction genre early on by the fact the text at the beginning talks of robots and at the beginning of the motion picture, the audience is shown a flying car. Also as the camera moves slowly, still at a long shot, there are random explosions from various buildings, which further extends the fact the film will contain violence of some sort. The image shown to us is that we are going into a building as the camera zooms slowly towards one at a particular floor. Every so often the film flashes to an image of an eye. ...read more.

In this case the audience can see he is under pressure and in fear and uncertainty of the test he is about to participate in. As the questions are being said to the prisoner a beating in the background starts and gets louder and heavier as the level of intensity raises. This represents the prisoner's heartbeat. Also the camera looks slightly up at the prisoner and slightly down at the interrogator. This gives the idea to the audience that the prisoner is stronger and bigger than the man who would seem vulnerable, as we look down on him. After the murder has occurred, the level of intensity of the fun is again lowered as the camera immediately zooms out of the building to the scenery of the town or city which the film is set in. ...read more.