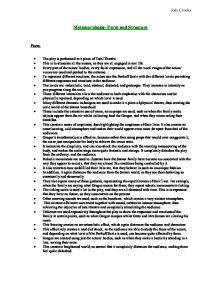 Metamorphosis- Form and Structure Form: * The play is performed as a piece of Total Theatre. * This is to stimulate all the senses, as they are all engaged in real life. * Every part of the actors' bodies, every facial expression, and all the vocal ranges of the actors' voices are used and pushed to the extreme. * To represent different reactions, the actors use the Berkoff Scale with the different levels provoking different responses and emotions in the audience. * The levels are: naturalistic, bold, abstract, distorted, and grotesque. They increase in intensity as you progress along the scale. * These different intensities allow the audience to both emphasise with the characters and be physically repulsed, depending on which level is used. * Many different dramatic techniques are used to make it a piece of physical theatre, thus creating the eerie world of the Samsa household. * These include the extensive use of mime, as no props are used, such as when the family make objects appear from the air whilst collecting food for Gregor, and when they mime eating their breakfast. * This creates a sense of emptiness, thus highlighting the emptiness of their lives. ...read more.

* This effectively creates a world of shock, as the audience are able to study the faces of the actors, and depending on what level of the Berkoff Scale is used, can become quite affected by them. * Images are created using just the actors' bodies, such as when they make a beetle by standing in a line, waving their arms. * This creates a heightened world, so surreal that it completely distances the audience, making them feel quite disturbed. Structure: * The plot takes place over a few days in the Samsa household. * The story is not linear, but uses flashbacks to show events that have happened in the past. * This creates a cinematic effect, which makes the audience remember the story more clearly. * It is therefore more visually interesting because it is more like a film than a play, thus emphasising the distance between the audience and the actors, and keeps their interest. * The flashbacks create a contrast between the human Gregor and how the Samsa's life used to be, compared with life with Gregor as an insect. This makes their present situation even more disturbing and strange. ...read more.

* Visually it is like a dream, with the family forming images of a beetle. * Section three is called, "Phase three." This represents that it is the final phase of Gregor's life. * Mr and Mrs Samsa retain their previous feelings towards Gregor. * Gregor feels completely alienated from the family and humanity and becomes very weak. * Greta goes through a huge metamorphosis as she changes from kindly caring for her brother, to completely hating him. This is what eventually kills Gregor. * This is ironic as Gregor is in fact more beautiful as a person on the inside than Greta is, but yet it is he who has to die. * The main climax is that of Gregor entering the room with the lodgers in, and Greta's reaction of repulse. This is the ultimate climax of the play. * Each climax occurs when Gregor enters the main living quarters- ironic because the more Gregor accepts his state and tries to join the family and therefore humanity, the more the family repulse him and he is driven further away. * The structure is held together by the repetition of the climaxes occurring at the end of each section. ...read more.