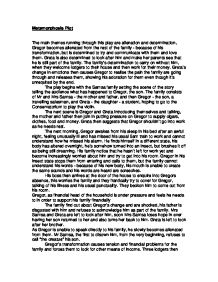 Metamorphosis Plot The main themes running through this play are alienation and determination, Gregor becomes alienated from the rest of the family - because of his transformation, but is determined to try and communicate with them and love them. Greta is also determined to look after him and make her parents see that he is still part of the family. The family's determination to carry on without him, when they welcome lodgers to their house and then work for their money. Greta's change in emotions then causes Gregor to realise the pain the family are going through and releases them, showing his adoration for them even though it's unrequited by the end. The play begins with the Samsa family setting the scene of the story telling the audience what has happened to Gregor, the son. The family consists of Mr and Mrs Samsa - the mother and father, and then Gregor - the son, a travelling salesman, and Greta - the daughter - a student, hoping to go to the Conservatorium to play the violin. ...read more.

His boss then arrives at the door of the house to enquire into Gregors absence, this worries the family and they frantically try to cover for Gregor, talking of his illness and his usual punctuality. They beckon him to come out from his room. Gregor, as financial head of the household is under pressure and feels he needs to in order to support his family financially The family find out about Gregor's change and are shocked, his father is disgusted with him and refuses to acknowledge him as part of the family. Mrs Samsa and Greta are left to look after him, soon Mrs Samsa loses hope in ever having her son returned to her and also turns her back to him. Greta is left to look after her brother. As Gregor is unable to speak directly to his family, he slowly becomes alienated from them. Mr Samsa, the first to disown him, from the very beginning, refuses to call "the creatue" his son. ...read more.

They send him back to his room and have nothing to do with him from then on. Greta slowly becomes less willing to look after Gregor and turns against him, not chosing to call Gregor in his insect form her brother. She then tries to persuade her father to get rid of the creature her reason, he is doing only harm to the family. Gregor realises the pain he is causing his family and decides to relieve them of him. Right at the end of the play, Gregor has a monologue in which he states that he would always love his family, no matter how horrid they had been to him because of his transformation. He is distressed and hasn't been fed for a few days, he witheres away into nothing and loses his health and will to live. Mrs Samsa declares her love for Gregor, whether he be in a human or insect state - he was still her son, by this time - it was too late. Gregor had died, cold, hungry and alone. He starves to death and the family are left to carry on their lives. ...read more.