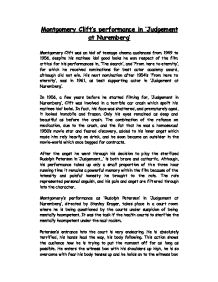 Montgomery Clift's performance in 'Judgement at Nuremberg' Montgomery Clift was an idol of teenage cinema audiences from 1949 to 1956, despite his matinee idol good looks he won respect of the film critics for his performances in, 'The search', and 'From here to eternity', for which he received nominations for best actor academy award, although did not win. His next nomination after 1954's 'From here to eternity', was in 1961, as best supporting actor in 'Judgement at Nuremberg'. In 1956, a few years before he started filming for, 'Judgement in Nuremberg', Clift was involved in a terrible car crash which spoilt his matinee idol looks. In fact, his face was shattered, and prematurely aged, it looked immobile and frozen. Only his eyes remained as deep and beautiful as before the crash. The combination of the reliance on medication, due to the crash, and the fat that he was a homosexual 1950's movie star and feared discovery, added to his inner angst which made him rely heavily on drink, and he soon became an outsider in the movie-world which once begged for contracts. ...read more.

This unskilled sentence phrasing shows he is highly nervous. At this point the audience become aware that he will not pass the sentence test that will follow, this gives the audience a sinking feeling, a premonition of defeat. Peterson is then asked about the birth date of Hitler. He tells them, 'I don't know and don't care'. The courtroom laughs at him, and he nervously laughs too. The audience would feel embarrassed for him at this point, and feel great empathy towards him. Throughout these questions, Petersons hands are gnarled up, which shows how tense he is. He is constantly fidgeting, shaking and grabbing his forbid with his hands, this shows how uneasy he is feeling, how intimidated he is by the courtroom full of the people who will decide his future. He also often takes large grasps of breath which shows he is in such a state he is finding it hard to breathe normally. He breathes in and swallows between sentences; the audience would think he is doing this to give himself time to think about what to say. ...read more.

Throughout the questioning the camera is largely focused on two characters, Peterson, and occasionally the judge. Close ups of Petersons face highlight his emotions and facial features, they appear even more intense and powerful. Peterson's body language constantly pointed to the judge, Spencer Tracy, Clift found a father figure in him both as an actor and as a friend. He is the person who helped him out when he was feeling low and persuaded him to play Peterson in the film. Clift plays the part with incredible realism, like it is happening for the first time. The emotions and thoughts speed back and forth across the characters face. Petersons eyes are a very poignant feature, they are very big, and expressive, and tell a lot about the way he is feeling. The lack of sound and music during this dramatic monologue enhances the tension and pressure Peterson is under, and consequently the emotions the audience feel for him. However, its only Clifts amazingly emotional portrayal of the character which lets this small proportion of the film remain a powerful memory within the film and one of the most memorable and haunting cameos in cinema history. ...read more.