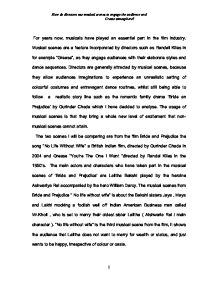 For years now, musicals have played an essential part in the film industry. Musical scenes are a feature incorporated by directors such as Randall Klies in for example "Grease", as they engage audiences with their elaborate styles and dance sequences. Directors are generally attracted by musical scenes, because they allow audiences imaginations to experience an unrealistic setting of colourful costumes and extravagant dance routines, whilst still being able to follow a realistic story line such as the romantic family drama 'Bride an Prejudice' by Gurinder Chada which I have decided to analyse. The usage of musical scenes is that they bring a whole new level of excitement that non- musical scenes cannot attain. The two scenes I will be comparing are from the film Bride and Prejudice the song "No Life Without Wife" a British Indian film, directed by Gurinder Chada in 2004 and Grease "You're The One I Want "directed by Randal Klies in the 1950's. The main actors and characters who have taken part in the musical scenes of 'Bride and Prejudice' are Lalitha Bakshi played by the heroine Ashwariya Rai accompanied by the hero William Darcy. The musical scenes from Bride and Prejudice " No life without wife" is about the Bakshi sisters Jaya , Maya and Lakhi mocking a foolish well off Indian American Business man called Mr.Kholi , who is set to marry their oldest sister Lalitha ( Aishwaria Rai / main character ). ...read more.

and the jovial song is a way of the director changing the atmosphere and showing a change of circumstance and mood in the movie. Whilst watching Grease, the audience are instantly uplifted by the song and realise that there are better things to come from the scene, which will be positive as opposed to other disheartening or dismal scenes. In, Bride and Prejudice, the vision of the musical scene is also very important, as it portrays the situation and the thoughts along with the feelings of the characters through song and dance, and through the direction of these scenes we are able to experience the atmosphere of what is currently taking place in the movie. Throughout the musical scene 'No Life Without Wife', we are shown Lalitha's viewpoints about marriage. Lalitha makes her expectations clear to the audience, on how she would prefer her ideal man to be. Through the character's mannerisms, Gurinder Chadha shows Lalitha's attitude towards marrying Mr Kohli, and her reluctant and unwilling feeling to take part in this arranged marriage. Lalitha's and her sister's moods seem to be comical when they tease Mr.Kholi during the scene. The audience are immediately attracted by these mannerisms as it leads them to believe that some tension will occur as the film goes on, and this builds an atmosphere of anticipation. The sister's actions /mannerism gives you an idea that they will do anything for a laugh i.e. ...read more.

She is reminiscing and thinking about what she wants in life. The long-shots are mainly on Lalitha and her sisters together dancing outside and inside of the house. In the shot we see the four sisters wearing their pyjamas they seen to be irritating Lalitha what she does not want after marriage. The lightening used in this shot is very bright. In Grease, the scene 'You're the One I Want ,' close ups are also used on Sandy and Danny in the carnival where they are trading their love to each other. The mid-shots are drawn on Danny's and Sandy's friends and the long-shots are used all over the carnival. The lighting of the shots is fairly bright because the scene is taken place at hours of daylight. In conclusion, the most effective musical scene is 'Your The One I Want 'from the film Grease. This is because personally every time I watch the film it always me laugh. Danny Zuku is a funny character, you could compare his personality to a girl (he is so vain) and very entertaining to watch. Another reason to why I choose Grease is because it is a film I can relate to because of the age gender and love which happens everyday in life around me. 'Bride and Prejudice' the scene 'No Life without Wife' negotiates with marriage which I am not similar to. Grease is the most famous musicals of all times, its popularity is worldwide and generations have been memorised by its fun loving youthful lyrics. ?? ?? ?? ?? How do directors use musical scenes to engage the audience and Create atmosphere? 1 ...read more.