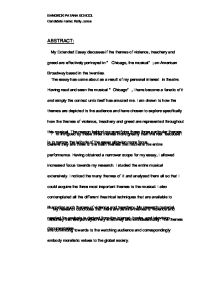 My Extended Essay discusses if the themes of violence, treachery and greed are effectively portrayed in &quot; Chicago, the musical&quot;; an American Broadway based in the twenties.

ABSTRACT: My Extended Essay discusses if the themes of violence, treachery and greed are effectively portrayed in " Chicago, the musical"; an American Broadway based in the twenties. The essay has come about as a result of my personal interest in theatre. Having read and seen the musical "Chicago", I have become a fanatic of it and simply the context unto itself has amazed me. I am drawn to how the themes are depicted to the audience and have chosen to explore specifically how the themes of violence, treachery and greed are represented throughout this musical. The reason behind me specifying these three particular themes is to narrow the latitude of the essay allowing more focus. I'm intrigued by these three themes more greatly than the rest because I believe they are three of the main themes that motivate the entire performance. Having obtained a narrower scope for my essay, I allowed increased focus towards my research. I studied the entire musical extensively. I noticed the many themes of it and analysed them all so that I could acquire the three most important themes to the musical. I also contemplated all the different theatrical techniques that are available to illustrating such themes of violence and treachery. My research material needed for analysis is derived from the Internet, books, and television documentaries. ...read more.

These suggestive movements blend with the lyrics of the song and as a result stun the audience about the audacity and violence that these murderesses are capable of. The lyrics to the song are ballads of the women's despair and ill fortune and the chorus is like a justification for their murderous acts: He had it coming He only had himself to blame If you'd had been there If you'd had seen it I betcha you would've done the same Therefore the song is sung very angrily and the actors shout rather than sing to emphasis the rage that they feel. The actors also adapt their facial expressions to the mood of the song with facial casts of a betrayed victim and of absolute hatred and fury. When Roxie's character began to gain more and more fame and publicity, Velma's jealousy rose to a point where desperation was the only answer. Velma tries to form a duo with Roxie when she sings I Can Do It Alone. Velma's dancing in this song carried along an extreme fast tempo with lots of spinning and flick movements to emphasise her desperation of bringing her popularity up and her mind spinning because she knew she was beginning to 'lose in the game of fame'. She was desperately trying to persuade Roxie to be on her side for her own benefits, which brings it all down to greed. ...read more.

The pale gold emphasises warmth portraying the comfort and ease Roxie feels as she hears about Billy 'the amazing lawyer'. It's similar to sunshine, which exhibits hope for Roxie and even the audience's mood lightens up during this scene. Although Billy is a slimy lawyer, the audience can't help but like him because he is the motive to the happy ending. The light rose element of the lighting exposes spritzes of 'lovey dovey' conditions as a line from the song being sung is "We love Billy..." The apricot tint in the lighting foreshadows Billy's cheekiness and skilful tactics he contains as a lawyer. Even though the lighting creates such a serene and warm atmosphere for Flynn's character, the audience later learns that they were being fooled as he doesn't turn out to be such a "wonderful guy", but more of a clever, deceptive lawyer. He betrays clients as easily as he does save them like the way he forgot completely about Velma as Roxie was starting to gain good publicity and fame. Costuming also communicates clearly to an audience and the notorious sexy costumes3 of Chicago are very important to the themes of the musical. 1 See Appendix 1 for diagram and information on the Proscenium Arch Theatre. 2 See Appendix 2 for diagram of my proposed idea for the stage. 3 See Appendix 3 for diagrams of costume design in Chicago BANGKOK PATANA SCHOOL Candidate name: Kelly Jones ...read more.