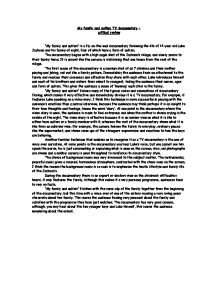 My family and autism TV documentary - critical review "My family and autism" is a fly-on-the-wall documentary following the life of 14-year-old Luke Jackson and his family of eight, four of which have a form of autism. The documentary begins with a high angle shot of the Jackson's village, and slowly zooms to their family home. It is almost like the camera is victimising that one house from the rest of the village. The first scene of the documentary is a medium shot of all 7 children and their mother playing and joking, set out like a family picture. Immediately the audience feels an attachment to the family and realizes their closeness and affection they share with each other. ...read more.

At one point in the documentary where the video diary is used, the audience is made to feel extremely sad when the mother is shown crying in the middle of the night. The video diary is effective because it is an insider view on what it is like to either have autism or a family member with it, whereas the rest of the documentary shows what it is like from an outsider view. For example, the camera follows the family to everyday, ordinary places like the supermarket, and shows close ups of the strangers expressions and reactions to how the boys are behaving. Another familiar technique that enables us to recognise it as a TV documentary is the use of voice over narration. ...read more.

I think the reason the background music is so calm is to emphasize the hectic lifestyle and family life of the Jackson's. During the documentary there is no expert or doctors view on the children's difficulties heard, it only features the family. Although this makes it a very personal programme, audiences tend to rely on facts. "My family and autism" finishes with the same clip of the family together from the beginning of the documentary, but this time with a voice over of one of the sisters reading a very loving poem she wrote about her family. This leaves the audience feeling very pleasant about the family and satisfied with the programme they have just watched. The documentary has very good closure, although, you only hear about the two younger boys and Luke himself, this leaves the audience wondering about the eldest. ...read more.