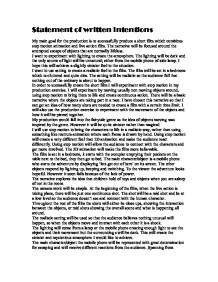 My main goal for the production is to successfully produce a short film which combines stop motion animation and live action film. The narrative will be focused around the attempted escape of objects that are normally lifeless.

Statement of written intentions My main goal for the production is to successfully produce a short film which combines stop motion animation and live action film. The narrative will be focused around the attempted escape of objects that are normally lifeless. I want to experiment with lighting to create the atmosphere. The lighting will be dark and the only source of light will be unnatural; either from the mobile phone of side lamp. I hope this will achieve a slightly sinister feel to the situation. I want to use setting to create a realistic feel to the film. The film will be set in a bedroom which is cluttered and quite dim. The setting will be realistic so the audience fell that nothing out of the ordinary is about to happen. In order to successfully create the short film I will experiment with stop motion in my production exercise. ...read more.

Using stop motion will allow the audience to connect with the characters and get more involved. The 3D animation will make the film more believable. The film is set in a bedroom, it starts with the occupier emptying their pockets on the table next to the bed, they then go to bed. The main character/object is a mobile phone who starts the adventure by displaying 'lets get out of here' on its screen. The other objects respond by lighting up, beeping and twitching. To the viewer the adventure looks hopeful. However it soon fails because of the lack of power. The narrative explores the idea that children hold of toys and objects when you are asleep of not in the room. The camera work will be simple. At the beginning of the film, when the live action is taking place, there will be just one continuous shot. ...read more.

My main influence for my production is Toy Story and its director John Lasseter. Although Toy Story was created using computer generated animation, and I will be using stop motion, it has provided my inspiration. The main idea of toys coming to life in Toy Story gave me my idea of objects escaping. However there are differences from the technique used to the overall feeling of the film. Toy Story being bright and enthusiastic and my production being mysterious and slightly sinister. There have been a lot of successful stop motion animations for example Chicken Run, Wallace and Gromit and The Nightmare Before Christmas all of which have inspired me because I like the illusion that the characters are moving themselves. I will use elements and ideas from directors such as John Lasseter, Tim Burton, Peter Lord and Nick Park to create my production but at the same time create an original piece. ...read more.