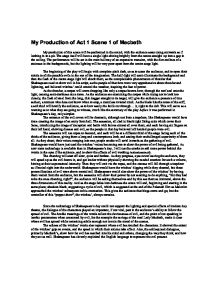 My Production of Act 1 Scene 1 of Macbeth

My Production of Act 1 Scene 1 of Macbeth My production of this scene will be performed in the round, with the audience seats rising outwards as if looking in to a pit. The stage itself will have a single light shining brightly from the centre straight up into a gap in the ceiling. The performance will be set in the main hallway of an expansive mansion, with the dim outlines of a staircase in the backgrounds, but the lighting will be very poor apart from the centre stage light. The beginning of the play will begin with complete pitch dark, so as to scare the audience, and to open their minds to all the possible evils in the eye of the imagination. The half-light will semi-illuminate the background and then the flash of the centre stage light will shock them, as the unexplainable phenomenon of thunder that Shakespeare used to show evil in his script, as the people of that time were very apprehensive about thunder and lightning, and believed witches' could control the weather, inspiring the fear of power. ...read more.

The assassins, all clad in black tight fitting suits which cover their faces, introducing the image of deception and battle with knives almost all over them, and each having six fingers on their left hand, showing disease and evil, as the people in that day believed left handed people were evil. The assassins will use ropes to descend, and each will be at a different third of the stage facing each of the thirds of the audience, giving them a long and contemptuous look, and stating their unchallenged superiority of them all. As they chant, their voices merging into one, purple smoke will swirl inwards as the gathering of evil. Shakespeare would have just used the witches' voices becoming one to show the power of evil being gathered, As now more technology is available than in Shakespeare's day, I will use the smoke to add more power behind the words in the eyes if the audience, and to show the effects of evil working instantaneously. ...read more.

This gives the audience that kings come and go, but the controller of this "puppet show", the witches', always remains. Since the technology of Shakespeare's day could not support the lighting and special effects of modern day theatre, the dialogue of the characters played an important, if not vital, part in the audience's ability to follow the spread of evil. The double meanings of the words reflect the deviousness of evil, and the point of not speaking in iambic pentameters when consumed by evil, for the example the ravings of the mad Lady Macbeth, made it clear where evil has spread while remaining subtle enough not to ruin the mood of the scenes. The echoes of the witches' words also represent where evil has touched the characters. It showed the extent of the witches' grip on events, and the speed in which their actions take effect. Also, the soliloquised dialogues, primarily Macbeth's, show how far evil has reached into his mind and others, changing the way they think, and how they act as well. Shakespeare has cleverly exploited the English language to represent the evil present. ...read more.