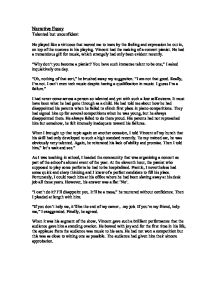 Narrative Essay Talented but unconfident He played like a virtuoso that moved me to tears by the feeling and expression he out in, on top of the nuances in his playing. Vincent had the making of a concert pianist. He had a tremendous gift for music, which strangely had only been evident recently. "Why don't you become a pianist? You have such immense talent to be one," I asked inquisitively one day. "Oh, nothing of that sort," he brushed away my suggestion. "I am not that good. Really, I'm not. I can't even tech music despite having a qualification in music. ...read more.

His parents had not reproached him but somehow, he felt intensely inadequate toward his failures. When I brought up that topic again on another occasion, I told Vincent of my hunch that his skill had only developed to such a high standard recently. To my trained ear, he was obviously very talented. Again, he reiterated his lack of ability and promise. Then I told him," let's wait and see." As I was teaching in school, I headed the community that was organizing a concert as part of the school's alumni event of the year. At the eleventh hour, the pianist who supposed to play some perform he had to be hospitalized. ...read more.

If you're my friend, help me," I exaggerated. Finally, he agreed. When it was his segment of the show, Vincent gave such a brilliant performance that the audience gave him a standing ovation. He bowed with joy and for the first time in his life, the applause from the audience was music to his ears. He had not won a competition but this was as close to wining one as possible. The audience had given him their sincere approbation. At the party after the concert, Vincent found himself surrounded by admirers. Praised flowed-"that was a sterling performance", "you're a splendid pianist!" and "how about joining our school as a music teacher?" this time, Vincent accepted the praises graciously and did not try to put himself down. "How about going professional one day?" I asked again. "Possibly," he answered. ...read more.