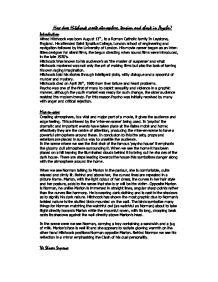 &amp;nbsp;How does Hitchcock create atmosphere, tension and shock in Psycho?

How does Hitchcock create atmosphere, tension and shock in Psycho? Introduction Alfred Hitchcock was born August 13th, to a Roman Catholic family In Leystone, England. He attended Saint Ignatius College, London school of engineering and navigation followed by the University of London. His movie career began as an inter-titles designer for silent films, the begun directing when sound films were introduced, in the late 1920's. Hitchcock Was known to his audience's as 'the master of suspense' and what Hitchcock mastered was not only the art of making films but also the task of taming his own raging imagination. Hitchcock told his stories through intelligent plots, witty dialogue and a spoonful of murder and mystery. Hitchcock died on April 28th, 1980 from liver failure and heart problems. Psycho was one of the first of many to depict sexuality and violence in a graphic manner, although the youth market was ready for such change, the older audience resisted the modern trends. For this reason Psycho was initially received by many with anger and critical rejection. Mise-en-scene Creating atmosphere, is a vital and major part of a movie, it gives the audience and edge feeling. This achieved by the 'mise-en-scene' being used. In 'psycho' the dramatic and important events have taken place at the Bates motel and home; effectively they are the centre of attention, producing the mise-en-scene to have a powerful atmosphere around these. In conclusion to this the sets, props and exteriors are placed in such a way to unsettle the audience. ...read more.

The camera shot pans across the bathroom where the paper containing the money lay lit under a lamp. The camera then turns towards the window the dreary house beyond. At this point Hitchcock has caught the audience completely off guard and now wondering why this inexplicable, unpremeditated death occurred. Arbogast Murder In the scene where Arbogast is entering the bates home he starts by looking up at the dull home making the house look bigger and more imposing, the scenery out side the home is bland and eerie, as there is a spooky tree outside. Then ahead are the steps leading to the house. The audience can now sense that approaching the old gothic home will be a mistake for Arbogast. The front door is unlocked as he enters the door makes a disturbing sound when it closes behind him, disturbing the dead silence. The house is dimly lit not enough for welcoming him. Arbogast looks around hesitantly, Hitchcock has then chosen subjective shots, so we can be put in Arbogasts position and emphasize with him. The music starts to imply that something is about to happen. He looks away and we see a cupid holding a bow. The shadow creating an un-known figure holding a knife. This is a perfect part of the miser-en-scene along with the bland interior. Arbogast then glances up towards the threatening stairs; he slowly proceeds upstairs where ahead of him is a crack in the door leaving a thin band of light beaming through the door. ...read more.

It is there for the closure. In this scene the psychiatrist Dr Richmond answers All of Sam and Lila's questions Things like Why Norman did those things, he tells them what Norman did in his past the psychiatrist basically implies they Norman has Schizophrenia. One of the last things we see is Norman/his Mother starting to talk about her Son and how she wouldn't harm a fly, at this point Norman looks up towards the Audience he grins menacingly, his smile somehow begins to morph into his dead mothers grin. The final shot of the movie is Marion's car being pulled out from the swamp. The conclusion I personally think the movie had a gripping plot; it was a quirky story about lust, Jealousy and one esoteric phenomenon. Psycho will have your mouth open, eyes Fixed and speechless simply Flabbergasted! My favourite sequence was the shower Scene as I was shocked and surprised, that movie could kill off what seemed the Main character so soon into it. I preferred this scene as it was planned very well and the graphics for an old 1960s film were very well done, the way Marion acted, all her movement and reactions seemed realistic. Studying Psycho has made me look at differently, I analyzed the scenes better and I payed attention to small details. My favourite film would be a horror movie or a comedy as I like the gripping plots, and some movies are very funny to watch. An example of my favourite film would be Scary movie as it's very funny and amusing to watch. By Chandni Suchak ...read more.