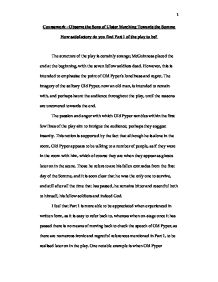 Observe the sons of Ulster marching towards the Somme - How satisfactory do you find Part 1 of the play to be?

Coursework - Observe the Sons of Ulster Marching Towards the Somme How satisfactory do you find Part 1 of the play to be? The structure of the play is certainly strange; McGuinness placed the end at the beginning, with the seven fellow soldiers dead. However, this is intended to emphasise the point of Old Pyper's loneliness and regret. The imagery of the solitary Old Pyper, now an old man, is intended to remain with, and perhaps haunt the audience throughout the play, until the reasons are uncovered towards the end. The passion and anger with which Old Pyper rambles within the first few lines of the play aim to intrigue the audience; perhaps they suggest insanity. This notion is supported by the fact that although he is alone in the room, Old Pyper appears to be talking to a number of people, as if they were in the room with him, which of course they are when they appear as ghosts later on in the scene. Those he refers to are his fallen comrades from the first day of the Somme, and it is soon clear that he was the only one to survive, and still after all the time that has passed, he remains bitter and resentful both to himself, his fellow soldiers and indeed God. ...read more.

He does not believe he is a hero, and is in distress due to the seeing of ghosts of his fallen companions 'during daylight'. The realism of the scene is heightened when Pyper pauses, and changes his mood. After the ringing, bigoted speech in which he mentions surrender, freedom and 'blood as [his] inheritance, totally out of place among dense rhetoric and clich�s, he loses spirit, perhaps after realising his idiotic outburst, and appears to fall into a deep depression, and demands that the ghosts leave him, as he 'does not wish to be [their] chosen'. It is probable that the ghosts are a metaphor for his guilt and regret during this scene. It appears strange that Pyper mentions how he changed after the war, 'for [them]', even though the audience is not aware of what happened in the space between. This is certainly an unorthodox method of dramatic writing, but in this situation I find it works rather well. He then proceeds to recount the little things that took place during the time he was with his comrades, such as 'hymns and football', but also the example of the orange sash that 'a good man who wanted to enter the church', Roulston, gave to him. ...read more.

Clearly, after all the contemplating, he still remains bitter and without answers. He then almost seems to justify himself, claiming that he 'was born knowing there was something rotting in humanity', and that he deserves to die for his actions. There is now a sense of Old Testament to his rhetoric, mentioning both Adam and the temple of the Lord. Upon the arrival of Moore, Millen, McIlwaine and Anderson, he realises that the circle is complete, and begins to recite phrases that appear later on, with some relevance, such as 'I have remarkably fine skin', and ' Look David, I've cut myself peeling an apple, kiss it better'. It is at this point that the younger Pyper appears, as if to bring Old Pyper back to the beginning, taking the audience with it, for him to recount once again. I feel that Scene 1 is constructed excellently, and sets the standard for the rest of the play. It is both chilling, and intriguing to the audience. The placing of the supposed final scene at the beginning of the play is superb, although it does highlight the necessity of the text to pick up the smaller points between Old Pyper and the eight men. 1,200 Words 1 ...read more.