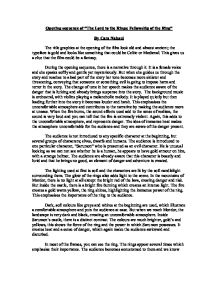 Opening sequence of &quot;The Lord to the Rings: Fellowship of the Ring&quot;

Opening sequence of "The Lord to the Rings: Fellowship of the Ring" By Cara Nahaul The title graphics at the opening of the film look old and almost ancient; the typeface is gold and looks like something that could be Celtic or Medieval. This gives us a clue that the film could be a fantasy. During the opening sequence, there is a narrative through it. It is a female voice and she speaks softly and gentle yet mysteriously. But when she guides us through the story and reaches to a bad part of the story her tone becomes more sinister and threatening, conveying that someone or something evil is going to impose harm and terror in the story. The change of tone in her speech makes the audience aware of the danger that is lurking and already brings suspense into the story. The background music is orchestral, with violins playing a melancholic melody. It is played quietly but then leading further into the story it becomes louder and harsh. ...read more.

In the mountains of Mordor, there is no light at all except the bright red of the lava, creating danger and risk. But inside the castle, there is a bright fire burning which creates an intense light. The fire creates a gold warm yellow, the ring shines, highlighting the immense power of the ring. This emphasises the importance of the ring to the audience. Dark, soft colours like greys and whites at the beginning are used, which illustrate a comfortable atmosphere and puts the audience at ease. But when we reach Mordor, the landscape is very dark and black, creating an uncomfortable atmosphere. Inside Sarumon's castle, there is a distinct contrast. The colours are much brighter, gold's and yellows, this shows the force of the ring and the power in which Sarumon possesses. It creates heat and a sense of danger, which again make the audience awkward and disturbed. In most of the frames, you can see the ring. The rings appear several times which emphasise their importance. ...read more.

This is effective because it is guiding the audience and putting them into the uncomfortable scary atmosphere and as though they are facing Sarumon one to one. The narrative is continuous through the opening sequence, and gives us the history of the rings and who is the evil character. It prepares us for the rest of the movie ahead. In conclusion, the opening sequence catches our interest by guiding us along through the story with the help of the narrative. We are already introduced to an evil character which possesses immense power and the audience are already aware of the harm he can inflict. The suspense and mystery is kept by introducing us to this character so early because the audience will want to see how he will use his power to his advantage. The pace is built up towards Sarumon, keeping the audience on their feet. We are then presented with a bright immense fire, which captures the dangerous and powerful atmosphere. The type of film this will be is a fantasy because of the characters, which include elves and dwarfs. Also, the name "Mordor" also suggests connotations of a fantasy realm. ...read more.