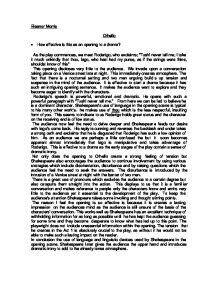 Othello How effective is this as an opening to a drama?

Eleanor Morris Othello * How effective is this as an opening to a drama? As the play commences, we meet Roderigo, who exclaims; "Tush! never tell me; I take it much unkindly that thou, Iago, who hast had my purse, as if the strings were thine, shouldst know of this" This opening discloses very little to the audience. We invade upon a conversation taking place on a Venice street late at night. This immediately creates atmosphere. The fact that there is a nocturnal setting and two men arguing builds up tension and suspense in the mind of the audience. It is effective to start a drama because it has such an intriguing opening sentence. It makes the audience want to explore and they become eager to identify with the characters. Roderigo's speech is powerful, emotional and dramatic. ...read more.

The audience now feel the need to delve deeper and Shakespeare feeds our desire with Iago's come back. His reply is cunning and reverses the backlash and under takes a strong oath and exclaims that he is disgusted that Roderigo has such a low opinion of him. As an audience we are perhaps a little confused the but it soon becomes apparent almost immediately that Iago is manipulative and takes advantage of Roderigo. This is effective to a drama as the early stages of the play contain a sense of dramatic irony. Not only does the opening to Othello create a strong feeling of tension but Shakespeare also encourages the audience to continue involvement by using various strategies which include disorientation, disturbance and by raising questions which the audience feel the need to seek the answers. ...read more.

The reason I feel the opening is so effective is because it is creates a lasting impression on the audiences mind as the audience is still unsure of the basis of the characters' conversation. This works well as Shakespeare has an excellent technique of withholding information for as long as possible until he has kept the audience guessing for some time and they become desperate to know what has led up to this point. The playwright does not include unessential information within the opening. The tension that he creates in the Act 1 is absolutely crucial to the play, as without it he would not be able to make such a lasting impact on the reader. In conclusion the use of language and linguistic devices used by Shakespeare in the opening scene. Shakespeare later gives the audience the upper hand and introduces dramatic irony to add to the already tense atmosphere. ...read more.