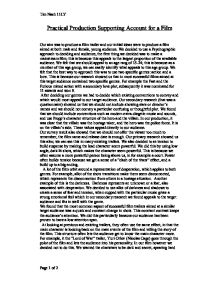 Practical Production Supporting Account for a Film Our aim was to produce a film trailer and our initial ideas were to produce a film aimed at both male and female, young audience. We decided to use a Psychographic approach to deciding and audience, the first thing we decided was to make a mainstream film; this is because this appeals to the largest proportion of the available audience. We felt that we should appeal to an age rang of 15-24; this is because as a member of this age group, we can easily identify what appeals to this age group. We felt that the best way to approach this was to use two specific genres: action and a love. This is because our research showed us that in most successful films aimed at this target audience contained two specific genres. For example the Fast and the Furious mixed action with a secondary love plot, subsequently it was nominated for 11 awards and won 8. ...read more.

This is because we often assume a more powerful person being above us, in for example a court. Power often builds tension because we get a sense of a "clash of the titans" effect, and a build up to a big ending. A lot of the film orbit around a representation of desperation, which applies to both genres. For example, allot of the shots transitions make them seem disconnected, which represents the disconnection from others in a hostage situation. Another example of this is the darkness. Darkness represents an unknown or a fear, also associated with desperation. We decided to use allot of darkness and shadows to create a sense of fear and tension, when cupped with the particular music gives a strong emotional feel which in our secondary research we found appeals to the target audience and fits in well with the genre. We found that the most common aspect of successful film trailers aimed at a similar target audience was a quick and constant change in shots. ...read more.

We did this by using things such as low angles, low-level lighting and darkness to suggest power and fade effects, slow motion, sunset effects and shadows to convey emotion. Another thing we constantly tried to change was the name. We needed something that represented the film but at the same time simple and effective. "Hostage" satisfies both these qualities. For example, we used the slow motion when the lead, played by Alex, falls against the wall; it is a very emotional time for him (in the film) and the slow motion coveys this well. The final product, both me and the other members of the team were very pleased with. We felt that especially by using many common conventions made it rely feel like a film trailer. Whether we enjoyed it was because it was designed to appeal to us particularly as members of the target audience is debatable, but overall we were all very pleased with the final product. ?? ?? ?? ?? Tim Nash 11LY Page 1 of 2 ...read more.