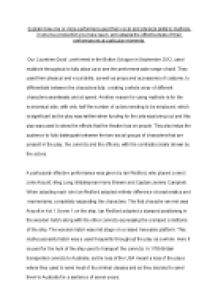 Our Countries Good, performed in the Bolton Octagon in September 2012, used multirole throughout to fully allow us to see the performers wide range of skill .

﻿Explain how one or more performers used their vocal and physical skills to multirole in one live production you have seen, and assess the effectiveness of their performances at particular moments. ?Our Countries Good?, performed in the Bolton Octagon in September 2012, used multirole throughout to fully allow us to see the performers wide range of skill .They used their physical and vocal skills, as well as props and accessories of costume, to differentiate between the characters fully, creating a whole array of different characters seamlessly and at speed. Another reason for using multirole is for the economical side, with only half the number of actors needing to be employed, which is significant as the play was written when funding for the arts was being cut and this play was used to show the effects that the theatre has on people. This also helps the audience to fully distinguish between the two social groups of characters that are present in the play, the convicts and the officers, with the contrasts clearly shown by the actors. A particularly effective performance was given by Ian Redford, who played convict John Arscott, Meg Long, Midshipman Harry Brewer and Captain Jemmy Campbell. When adopting each role Ian Redford adopted entirely difference characteristics and mannerisms, completely separating the characters. ...read more.

We once again see the harshness of the convicts world when Arscott produces a piece of paper he calls his compass. ?I gave my only shilling to a sailor for it! He said it was a compass?. Redman shows Arscott?s sheer disbelief at this statement by widening his eyes and speaking his lines fast. This also shows his ignorance and lack of education of what a compass was reinforcing his class. This creates sympathy with the audience, for Arscott . last scene relationship with Caesar the compass a2 s1 In contrast to Arscott, the next character we see Ian Redford play Midshipman Harry Brewer, who belongs to neither of the two social groups in the play, the convicts or the officers. Ian Redford adopts a strong confident stance, with strong shoulders contrasting with the previous slumped positioning, reinforcing the difference in the two characters. He uses strong arm gestures and adopts a strong confident voice with a cockney accent reinforcing the difference in the characters once more, with him not being as high class as the officers but still higher than the convicts. When Harry Brewer, Ian Redford wore a blue jacket on top of his clothes. This simple accessory allowed the audience to clearly see the difference class in the two characters he was playing, as well as the reinforcing the fact he belonged in the middle of the two groups, with officers wearing tailored red jackets and the convicts wearing dark rag like clothing. ...read more.

Ian Redford shows this by following Ross around, always being a few steps behind him. Campbell is also portrayed as being drunk most of the time and so Redford adopts an idiosyncratic speech pattern, making Campbell stumble over when? and slur his words and often not make sense. Redford also adopts simplistic facial expressions eg. Open mouthed wide eyed portraying the childlike simplicity about Campbell; however the fact Campbell is drunk most of the time furthering this. Ian Redford adopts wild exaggerated gestures and facial expressions adding a comical layer to the play. His actions also create comedy from the reactions of the other actors who give him confused looks. To portray the fact Campbell is drunk Redford also adds senseless and random interjections into speech. A final thing Ian Redford does to distinguish Captain Campbell from the other characters that he played he acting out some of his lines physically. This was acted as comical spontaneous actions from Campbell to aid what he was saying. When? Where he made you laugh ?grenades ... war .. phew? he acted the throwing of the grenade act1 s6 (p20) This once again gained a comical reaction from the others characters in the scene. Ian Redford cleverly used difference skills to distinguish clearly between the four different characters he played, come back to how he met the intensions of the playwright using difference pitches, body language and gestures for each character. ...read more.