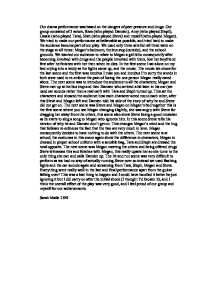 Our drama performance was based on the dangers of peer pressure and drugs.

Our drama performance was based on the dangers of peer pressure and drugs. Our group consisted of 5 actors, Rees (who played Damien), Amy (who played Steph), Cassie (who played Tara), Matt (who played Steve) and myself (who played Megan). We tried to make our performance as believable as possible, and tried hard to make the audience become part of our play. We used only three sets but all three were on the stage at all times: Megan's bedroom, the bus stop (outside), and the school grounds. We wanted our audience to relate to Megan a girl who consequently after becoming involved with drugs and the people involved with them, lost her boyfriend first after he finishes with her then when he dies. ...read more.

with Tara and Steph turned up. This set the characters and showed the audience how each character acted round each other, after this Steve and Megan left and Damien told his side of the story of why he and Steve did not get on. The next scene was Steve and Megan on Megan's bed together this is the first scene where you see Megan changing slightly, she was angry with Steve for dragging her away from the others, this scene also show Steve being a good musician as he starts to sing a song to Megan who ignores him. In this scene Steve tells his version of why he and Damien don't get on. ...read more.

The hit and run scene was very difficult to perform as we had no way of actually running Steve over so instead we used flashing lights and the car sounds again and screaming from Tara, Steph, Megan and Steve. Everything went really well in the last and final performance apart from the guitar falling over! This was a bad thing to happen and I could have handled it better be just ignoring it but I did carry on after the initial shock (I thought I'd broken it), and I think the overall effect of the play was very good, and I feel proud of our group and myself for our achievements. Sarah Maile 11BI ...read more.