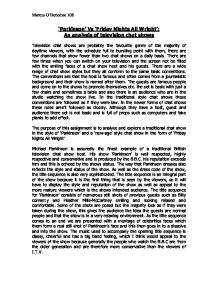 'Parkinson' Vs 'Friday Nights All Wright': An analysis of television chat shows Television chat shows are probably the favourite genre of the majority of daytime viewers, with the schedule full to bursting point with them, there are few channels that show fewer than two chat shows on a daily basis. There are few times when you can switch on your television and the screen not be filled with the smiling faces of a chat show host and his guests. There are a wide range of chat show styles but they all conform to the same basic conventions. The conventions are that the host is famous and often comes from a journalistic background and their show is named after them. The guests are famous people and come on to the shows to promote themselves etc. the set is basic with just a few chairs and sometimes a table and also there is an audience who are in the studio watching the show live. In the traditional style chat shows these conventions are followed as if they were law. In the newer forms of chat shows these rules aren't followed as closely. Although they have a host, guest and audience there set is not basic and is full of props such as computers and fake plants to add effect. The purpose of this assignment is to analyse and explore a traditional chat show in the style of 'Parkinson' and a ...read more.

Parkinson's opening question to Elton is 'what's up' I think this simple question is used to direct the interviewee to the reason for his appearance on the show. It also shows that although Parkinson uses formal language his language can also include some Yorkshire dialect. Elton John answers politely and hints at why he is on the show. The body language of Parkinson is open and appealing, this is so that the guest will feel relaxed in his company and will answer his questions more openly. Elton's body language shows that e is defensive and doesn't want to reveal too much to his host. The style of questioning used by Parkinson is set so that it would help Elton to open up and become more confident in the answers he gives. Although the questions were probably agreed before the show they will still tell the audience what they want to know about the guest. Elton Johns appearance on the show in terms of his reasons for being on the programme fulfil the conventions of a chat show because he is on the show to promote something that he is doing at the moment in his career and one of the conventions of a chat show is that the guest in famous and appears on the show to promote there career. ...read more.

The host sits on a simple purple leather chair with a table with a C.C.T.V screen on top of it. Then there is another simple purple sofa for the guest to sit on. There are two steps down from the stage and in this area the audience sit in groups on simple chairs around small tables as if they were in a pub or night club. In the corner of the studio there is a cage containing football fans. I think that there are probably three cameras, the first is at the back of the studio and is used to show the guest, host and audience together and the second and third cameras are used so that both the host and guest have individual shots when they are speaking. The audience participate more in this show than in 'Parkinson' because they shake hands with the guest when he enters and also they laugh a lot more than in Parkinson and the laughing is not forced as it often is in Parkinson. The most effect of these two chat shows is probably 'Parkinson' because it will appeal to a wider audience than 'Friday nights all Wright' and also the guest will be more sophisticated and well known than those on Ian Wrights show. Out of the two chat shows I think I prefer 'Parkinson' because there is a wider range of guests and the guests are often in the news at the time so I like to hear there views on current affairs. Marcus O'Donohoe 10E ...read more.