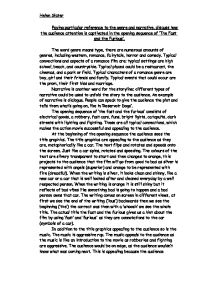 Paying particular reference to the genre and narrative, discuss how the audience attention is captivated in the opening sequence of 'The Fast and the Furious'.

Paying particular reference to the genre and narrative, discuss how the audience attention is captivated in the opening sequence of 'The Fast and the Furious'. The word genre means type, there are numerous amounts of genres, including western, romance, fairytale, horror and comedy. Typical convections and aspects of a romance film are; typical settings are high school, beach, and countryside. Typical places could be a restaurant, the cinemas, and a park or field. Typical characters of a romance genre are boy, girl and their friends and family. Typical events that could occur are the prom, their first kiss and marriage. Narrative is another word for the storyline; different types of narrative could be used to unfold the story to the audience. An example of narrative is dialogue. People can speak to give the audience the plot and tells them what's going on, like in 'Reservoir Dogs'. The opening sequence of 'the fast and the furious' consists of electrical goods, a robbery, fast cars, funs, bright lights, catapults, dark streets with lighting and fighting. These are all typical convections, which makes the action movie successful and appealing to the audience. ...read more.

This is all appealing to the audience because nobody knows what his 'share of the deal' is meaning that the audience is going to find out later in the movie. Whilst the conversations taking place we can see a reverse angle shot taken of the man. When we see his face all we can see are his cheeks as he is wearing glasses and a cap. This adds to the suspension, as the audience doesn't know who he is and when they will see him next in the movie. Questions can be asked here like will he play a major part in 'The Fast and the Furious'? Or will we see him again? When the van with 'Rodgers' on the side is in the parking bay the sky and weather is light and then the audience see a close up of the wheel. This is metaphorically describing a clock as the van is moving so is the clock and then the camera pans out and we get a wide shot of the van on a dark, lamp lit motorway. This involves the audience has it has been seconds to the audience whereas it has been hours in the movie. ...read more.

There are three cars and a van. The car on the right goes in front of the van, the car behind stays behind and the car to the left goes underneath the van so they are in a straight line. Here the audience feels in a way to be relieved as they have succeed without dying yet the driver of the 'Rodgers'' van is nearly dead. The camera then pans the van into the horizon and you see the colors go from cold blue to warm orange. The audience wants to know what happened to the goods after that? What happened to the driver of the van? What happened to the men in masks? What was the deal? Did the man at the loading bay get his share of the deal? All these questions enforce the audience to carry on watching and to carry on being the audience. In addition to this everything in the opening sequence of the fast and the furious captivates the audience's attention. This is usually done by suspension. All the way through the sequence the audience is in suspense to what's going happen next. Nobody knows until they watch it but totally everything adds to keeping the audiences attention captivated in the opening sequence of the fast and the furious. Helen Slater ...read more.