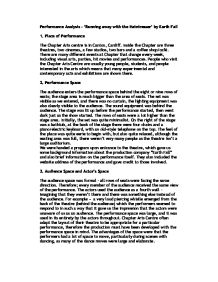 Performance Analysis - 'Running away with the Hairdresser' by Earth Fall

Performance Analysis - 'Running away with the Hairdresser' by Earth Fall 1. Place of Performance The Chapter Arts centre is in Canton, Cardiff. Inside the Chapter are three theatres, two cinemas, a few studios, two bars and a coffee shop/caf�. There are many different events at Chapter that change every week, including visual arts, parties, hit movies and performances. People who visit the Chapter Arts Centre are usually young people, students, and people interested in the arts which means that many experimental and contemporary acts and exhibitions are shown there. 2. Performance Space The audience enters the performance space behind the eight or nine rows of seats; the stage area is much bigger than the area of seats. The set was visible as we entered, and there was no curtain, the lighting equipment was also clearly visible to the audience. The sound equipment was behind the audience. The stage was lit up before the performance started, then went dark just as the show started. The rows of seats were a lot higher than the stage area. Initially, the set was quite minimalist. On the right of the stage was a bathtub, at the back of the stage there were four chairs and a piano/electric keyboard, with an old-style telephone on the top. ...read more.

5. Lighting The lighting equipment/illumination sources were constantly in view during the performance and there was no attempt to hide them. The lighting at the end of the performance was the most noticeable; as the red light gave the entire theatre an eerie feel to it. Generally the lighting was light in some places and dark in others. What I found was that the lighting was more noticeable when the music or mood changed. Projections were sometimes used to emphasise the movements of a particular character at one time, bringing all the audience focus to them. At the beginning this was very effective as it was used when a woman character answered the phone and the projection displayed a close up image of her face. Sometimes the projection would freeze on a particular actor's movement, while they continued to move. These projections were grey-style which was a blatant Contrast between colour and black and white. 6. Sound There was one musician who was at the back of the stage, on the left throughout the performance in its entirety. He mainly played the guitar but did occasionally play the piano/electric keyboard during the performance. ...read more.

I think of physical theatre as an alternative to 'regular' theatre. At first I was enthusiastic about watching the play, as I found it quite hard to comprehend the storyline and plot. However, towards the end of the performance the storyline became more clear which made it more enjoyable. At the end of the performance I felt happier that I understood the main plot and storyline and after reading some background information on the performance I felt a lot more comfortable with some of the scenes which I had before found very hard to understand. The most memorable part of the performance was the end where the storyline began to unravel and I didn't feel that the story all of a sudden finished, I felt that it finished quite slowly as if to explain things to the audience as the performance moved on, particularly towards the end of the play. I was found the performance genuinely interesting and inspirational, my favourite aspect being the dark humour. I found the dancing almost memorizing, however I didn't enjoy that fact that some of the dancing seemed to last too long, and although it was very effective, some of the scenes could have been a little bit shorter, this may have enhanced the viewing pleasure of the audience. I generally enjoyed the production very much. ...read more.