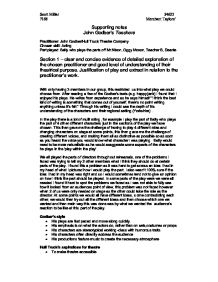 Section 1 – clear and concise evidence of detailed exploration of the chosen practitioner and good level of understanding of their theatrical purpose. Justification of play and extract in relation to the practitioner’s work.

With only having 3 members in our group, this restricted us into what play we could choose from. After reading a few of the Godber’s texts (e.g. happy jack) I found that I enjoyed his plays. He writes from experience and as he says himself “I think the best kind of writing is something that comes out of yourself, there’s no point writing anything unless it’s felt.” Through his writing I could see the depth of his understanding of the characters and their regional setting (Yorkshire).

In the play there is a lot of mulit roling, for example I play the part of Salty who plays the part of 4 other different characters just in the sections of the play we have chosen. This then gave me the challenge of having to play 4 different roles and changing characters on stage at some points, this then gave me the challenge of creating different voices, and making them all as distinctive as possible so as soon as you heard the voice you would know what character I was playing. Salty would need to be more naturalistic as he would exaggerate some aspects of the characters he plays in the ‘play within the play’.

We all played the parts of directors throughout rehearsals, one of the problems I faced was trying to tell my 2 other members what I think they should do at certain parts of the play. I found this a problem as it was hard to get across an idea I had in my head of what I pictured how I would play the part. I also wasn’t 100% sure if the idea I had in my head was right and so I would sometimes tend not to give an opinion on how I think the part should be played. In some parts of the play were we were all needed I found it hard to spot the problems we faced as I was not able to fully see how it looked from an audiences point of view, this problem was not faced however when 2 of us were only needed on stage as the other could take the role as the director. At some points we would all have different ideas, some contradicting each other, we would then try out all the different ideas and then choose which one we wanted and then main way this was done was by what we wanted the audience’s reaction to be like at this part of the play.

To help me understand the style of John Godber we went to see a production of weekend breaks. The play had observational comedy similar to teechers. Watching weekend breaks helped me to understand the dynamics of families in northern, working class communities and showed us how to bring the humour out of the text and how to work with the audience.

We took 2 extracts out of the play, the first being the start of the play up to a suitable place to stop, we choose this part of the play as it introduces the audience to characters and also gives us the challenge of introducing our characters to the audience. Our other section we choose includes a school disco and we wanted to do this as we thought we could really show the comedy side to the play by acting out this part and challenge our physical skills.

Word count: 664 (not including headings)

Section 2-Outline of dramatic intentions for the audience, in relation to the group’s interpretation of the chosen extract and the influence of the chosen practitioner; accurate use of specialist terminology

Our aims for our production:

As non of us was taking the directing option we all took on the role together. After working on our own interpretations we soon realised we all had very similar ideas and began to slowly work our way through the play. I am easily distracted but with having such a small group I found it much easier to concentrate and this was mainly because I didn’t want to let me other two classmates down.

The first section in our performance is essential as this is where we tell the audience what is happening and what is going to happen. We wanted the audience to be able to relate with the characters and this was helped by the braking of the ‘fourth wall’ at first I just saw it as a way of stepping out the play but I later realised that it was a great opportunity to connect with the audience and build up the relationship. As an audience member myself I am comfortable when a character breaks the ‘fourth wall’. Godber is clear on this point: “you have to connect, you have to feel, you have to engage sympathy of the audience.” I saw how this tactic generates commitment as it makes the audience feel more involved with the characters and their lives. My own acting approach was to try and come across as comfortable as possible to the audience even if I did not feel comfortable myself.

Hull truck productions are fast paced. We had to ensure that we carried the script along so it would not seem slow, boring and with it being set in a school, scripted. Therefore in our first section when having a conversation between the three of us we tried to make it as natural as possible and this then helped with the pace of the play. However, there are parts were the pace slows down, for example in the car scene when Mr. Nixon head buts Oggy Moxon there is a long pause after he does so, this adds to the humour of the play as the audience have a chance to see all three different reactions.

When considering our design we went back to our notes on Godber, because of his style we didn’t want to clutter up the stage and only used necessary props and costume. To show the audience when the character was changing there would be a clear costume change as we thought this would help the audience notice each change.

As per Godber, music is used in our production to show period and create atmosphere, the music also helps to create the disco feel. Music plays during all the blackouts, this gives the audience an idea of what the feel of the section is going to be like.

Word count: 521 (not including headings)

Section 3- Assessment of the rehearsal process and of the potential effectiveness of the piece for an audition.

Evaluation of the development of the nominated skill in relation both to the chosen text and to the influential practitioner’s ideas; awareness of health and safety factors.

Godber and Hull Truck believe that that the audience are just as important as the characters of the play. To Godber, a play is non-existent without an actor-audience relationship. Throughout the play ‘teechers’ the characters are always braking the 4th wall and directly talking to the audience, the problem I faced with this was making it obvious when I was broke out of the 4th wall. One of the obvious things I would do would be to walk towards the audience and talk directly to them, but I also had to change the tone in my voice, when I was talking to the audience to make it obvious I wasn’t still in the play.

When we first read the play, we tried it in a Yorkshire accent. I found the accent hard.

I over came these problems by:

When working on the different physicality’s for the different characters, we exaggerate everything about them, for example the character Oggy Moxon (school bully) we tried to show his character just through the way he walked and his facial expressions and exaggerating helped this a lot. We firstly stood in a neutral position and then would count down from 3 and then we would all walk around the room as the character we had chosen, 2 of the members of the group would have to copy the other member, this way we would all have the same physicality’s and so when preforming the characters will hopefully be the same

We tried improvisations to help us explore the characters and to see what makes them tick. I developed the idea Mr. Nixon wanted to be a teacher all his life however his farther is not happy with his decision and wants him to follow the same path that he did. This was very useful as it helped me understand why Mr. Nixon had the passion he does for teaching.

My characters are often breaking the forth wall and I needed to feel comfortable in doing so, one of the ways I did this is by picking certain sight when I come forward and speak to the audience, this way I will know exactly where to look and will hopefully cover the whole audience.

When working in the hall and in the studio we made sure that the floor was free of anything that we could trip on or injure ourselves with.

Our stage was laid down by the caretakers, they also set out the seating and made sure that the safety railing were in place. The lighting was rigged by professionals using g-clamps and safety chains and we made sure the emergency exit lights were working.

Word count: 572 (not including headings)