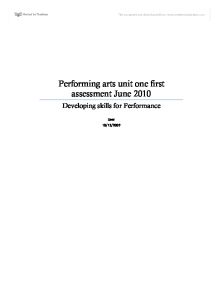 Performing arts unit one first assessment June 2010 Developing skills for Performance User 10/13/2009 Developing skills for drama The definition of actor or actress is; a person who acts in a dramatic production and who works in film, television, theatre, or radio in that capacity. Their main job is to interpret a dramatic character. Actors, like singers, musicians and dancers are performing artists and specialists in the field of entertainment. Actors may act on stage or become involved in film, television or radio productions. Since singing, dancing and the playing of instruments form part of many productions, it is to their advantage to have some knowledge of, or talent for the other performing arts. During their careers, many performers choose to specialise in a specific field of acting. Some actors find live theatre demanding and rewarding, while others prefer acting in front of a camera. Depending on the media used, different skills are required of actors. Actors involved in live theatre make greater use of exaggerated movements and voice-projection than persons acting in front of a camera do. Film actors employ more subtle body movements and facial expressions as their audiences often view them from the close-up angle of the camera. Someone involved in radio production primarily makes use of voice modulation and intonation in order to create the desired expression. The acting techniques may also depend on the type of role actor's play. Some actors may have the appearance and personality which enhance their skill as comedians, while others may have the assets and skills required for the interpretation of serious dramatic roles. Versatility in all areas of dramatic performance creates more employment opportunities for the actor. Despite what many people say about people who take a career in acting the profession is far from an easy one. It requires hard work and serious vocal, physical and mental training. It needs long hours of study and intense concentration as well as discipline. ...read more.

with keeping in time with the other actors and the music, because of the lack of dialogue we had to rely on our movements and our facial expressions which had to be overacted. Workshop 4-2nd October 2009 Aim: Further develop aim from last workshop of using movement to show emotions, bring outlandish actions into an everyday scene, and explore what makes a movement ordinary and what makes a movement aberrant and what other variations I could do to make my movements "wild and large" but to make them get gradually bigger. To raise the dynamic scale, Aim for the level of prosthetic limitation, which wouldn't be open to me in real life. Jacques le coq- you are sitting at a cafe, opposite at another table someone makes a small gesture to you. You wonder if you know them, out of politeness you respond in the same way, they, put at ease begin to gesture more wildly making large movements playing with an object, little by little a complicity grows between you both an dialogue conducted in gestural signs or facial expressions. In the end they rise and start to walk towards you, smiling you also get up to greet them but they pass to someone behind you. I tried not to over think or rehearse too much which spoils the spontaneous way to react to the other person. I had fun playing the stranger who started or the person who thought they were being waved at, both ways I got to practice being abstract. When performing in front of the class I chose not to do a movement to attract the other person attention because to that was too realistic, so I pulled a face that no one (except maybe a small child) would pull in public, I used height variation as well I would be crawling on the ground then standing on my chair and making large hand gestures by the end of the scene I was making my movements as big as possible. ...read more.

Another skill I have improved upon is taking constructing criticism and using it to enhance my performance. In workshop eight, where we each perform a monologue with movement in it, I performed it in front of some of the class I received some good information that I have been practicing so my monologue will reach its potential. One of my weaknesses that I improved was turning away from the audience, but each time that I performed in front of the group I made sure to face them and I purposely made sure that I faced them. I think that I improved because of having movement workshops separate from voice because before then I had to split my time between voice and movement in class. Now I can concentrate on movement. I have become more organised this year, I have kept all my papers together and, because during each workshop I would write all about it, what we were doing why I thought it would help me in performing and what I thought of the end result and how productively I used my time, then when I got home I would write up my workshops and I would add to the notes that I had in my book because I will have had more time to think about what I did in school. Although I am close to improving all my skills and weaknesses I think as I progress through this year I will find more skills and weaknesses that I did not know of. Even though trying to improve upon your skills time and time again can be challenging, I like doing so because it means that I can perform to the best of my ability, because the more you give to a performance the more you will get back. And so it goes, this most elusive, mysterious and often misunderstood art form, the art of acting which lends itself to endless interpretation and endless speculation is one of the hardest jobs to sustain but at the same time is the most rewarding. ?? ?? ?? ?? ...read more.