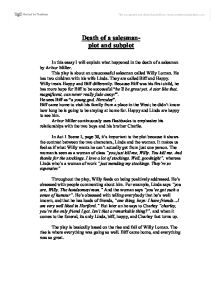 plot and subplot of death of a sales man

Death of a salesman- plot and subplot In this essay I will explain what happened in the death of a salesman by Arthur Miller. This play is about an unsuccessful salesman called Willy Loman. He has two children with his wife Linda. They are called Biff and Happy. Willy treats Happy and Biff differently. Because Biff was his first child, he has more hope for Biff to be successful "he'll be great yet. A star like that, magnificent, can never really fade away!". He sees Biff as "a young god. Hercules". Biff came home to visit his family from a place in the West; he didn't know how long he is going to be staying at home for. Happy and Linda are happy to see him. Arthur Miller continuously uses flashbacks to emphasize his relationships with the two boys and his brother Charlie. ...read more.

Isn't that a remarkable thing?", and when it comes to the funeral, its only Linda, biff, happy, and Charley that turns up. The play is basically based on the rise and fall of Willy Loman. The rise is where everything was going so well. Biff came home, and everything was so great. The first scene is where Willy talks to Linda about his life and talks about Biff "the trouble is he's lazy, goddammit!... Biff is a lazy bum!... why did he come home? I would like to know what brought him home." The second scene is where biff and happy are in the other room and can hear every word the parents are saying. They talk about their relationship with Willy "why does dad mock me all the time?... everything I say there's a twist of mockery on his face. I can't get near him." ...read more.

Willy talks about how if he went with his brother Bernard, he would be successful too "why didn't I go Alaska with my brother Ben that time! Ben! That mans a genius, that man was success incarnated! What a mistake! He begged me to go." We see how much Willy loves Biff "he'll be great yet. A star like that, magnificent, can never really fade away!... a young god. Hercules", but when Biff finds out about Willy's affair, Biff hates him "don't touch me, you - liar!...you fake! You phony little fake! You fake!". Then the last scene is the fall, when the family breaks apart and Willy dies. Linda, Biff, Happy and Charlie are the only ones to be at the funeral, even though Willy told them he was well liked "one thing, boys: I have friends...I am very well liked in Hartford.", except from Charlie when he said: "charley, you're the only friend I got. Isn't that a remarkable thing?". Willy wasn't only lying to his family, but he was lying to himself. ...read more.