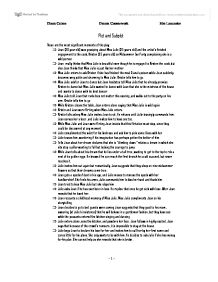 Plot and Subpolt of Miss Julie

Plot and Subplot These are the most significant moments of the play: ==> Jean (30 year old) was gossiping about Miss Julie (25 years old) and the artist's finished engagement to the cook, Kristen (35 years old) on Midsummer Eve Party complaining she is a wild person ==> Jean really thinks that Miss Julie is beautiful even though he is engaged to Kristen the cook, but also Jean thinks that Miss Julie is just like her mother ==> Miss Julie enters to ask Kristen if she has finished the meal Diana's poison while Jean suddenly becomes very polite and charming to Miss Julie. Kristin tells him to go. ==> Miss Julie ask for Jean to dance but Jean hesitates tell Miss Julie that he already promise Kristen to dance but Miss Julie wanted to dance with Jean that she is the mistress of the house and wants to dance with its best dancer ==> Miss Julie told Jean that rank does not matter this evening, and walks out to the party on his arm. Kristin tells him to go ==> While Kristen cleans the table, Jean enters alone saying that Miss Julie is wild again ==> Kristin and Jean were flirting when Miss Julie enters. ...read more.

Jean follows in highly excited. Jean says that because of the crowd's rumours, it is impossible to stay at the house. ==> Julie begs Jean to declare his love for her and invites him to call her by her first name and cares little for his plans. She only wants to be with him. He decides to ask Julie if she has money for his plan. She cannot help as she reveals that she is broke. ==> After a brief pause, Jean announces that the plans are off. Suddenly it is clear that he wanted her for her money. ==> Jean calls her a whore. And said that stole the story of the oat bin from some newspaper article. He says he told her these stories to win her over. ==> Jean complimenting her beauty and refinement and was sorry that she could never love him. Julie is unmoved but cannot bear herself from him. Julie pauses: she wants to tell him her life before they become travelling companions and went back home ==> Kristin enters, carrying his shift and tie. Kristin gasps at the mess; Jean blames it on Miss Julie. Kristin reminds Jean that he promised to join her at church this morning. Jean gets dressed. ...read more.

Then gave Miss Julie the axe he used for the bird and let her go to the barn and kill herself A subplot is sometimes referred as kind of a 'B story' or a secondary plot; sometimes a subplot connects to the main plot in drama/theatre plays. The subplot to Miss Julie is that the relationship to Jean and Kristin how they are engaged and futhermore how everything changes when Jean told Kristin that he slept with Miss Julie, Kristin was disgusted rather than jealous. This play reminds me of Romeo and Juliet even though the two play both written in different times. It looks like Miss Julie and Jean are both 'star crossed lovers' as a beautiful young girl sucide herself because of Romeo death, Miss Julie sucide herself but not Jean's death but the fact because it might be of her father or Jean. Romeo and Juliet had problems because of their family's rage to each other similar to Miss Julie and Jean problems since they had sex they are scared if they get caught and trying to make plans to run away but its all ruin by the fact Miss Julie was expressing her feelings to her servant Kristin. Kristin found out that Jean and Miss Julie were going to run away. Diana Caires Drama Coursework Mrs Lancaster - 1 - ...read more.