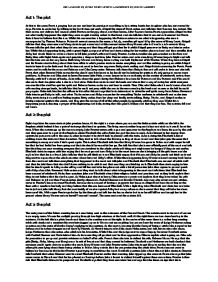 Plot for The Crucible

Act 1: The plot At first in the scene Parris is praying but we can not hear his words just mumbling as he is sitting beside her daughter who has not moved for days. He tries to wake her by talking to her but it does not work. Abigail the niece of Parris enters and tells him that Susanna has arrived. She than comes and delivers bad news in which Parris is not happy about, and then leaves. After Susanna leaves Parris approaches Abigail to find out what really happened the night they were caught dancing naked in the forest, and she tells him that it was not as it seemed but Parris finds it hard to believe that this is so. Whilst this conversation is happening Mrs Putnam enters to see what is happening who soon is accompanied by Thomas Putnam. Putnam's servant comes to the scene; a fat, sly, merciless girl aged 18 by the name of Mercy Lewis. Abigail tells her that they were seen and Mercy starts to get scared and at this moment enters Mary Warren who is 17 and is a sub-servant. Mary Warren tells the girls that what they did was wrong and that they will get punished for it whilst Abigail goes over to Betty and tries to wake her. Whilst this is happening betty, with a great fright, jumps out of bed and starts asking for her mother whom is dead and then reveilles that Abby had drunk blood to make a charm to kill John proctor's wife and Goody Proctor. As this is revelled she gets smashed on the face and Betty then with fright faints again and goes into a sleep as last time. John Proctor enters and as he does Mary Warren leaps in fright and tells him that she was on her way home. Both Mary Warren and Mercy leave as they are both frightened of Mr Proctor. ...read more.

As he is seen they all go silent and he then approaches Giles to explain what is going on. Giles asks for promotion to go up and provide evidence on behalf of his wife. Francis then also tries to defend his wife, Rebecca Nurse. He says that the girls (Betty, Abby, Mercy, and Mary) are a bunch of frauds and that they cannot be believed. Danforth and Hathorne are both shocked that someone would again dare to question the court. Mary Warren and John Proctor enter. John tries to get Mary to confess that she and the other girls were lying about there being witches in Salem. Mary admits that she was pretending the whole time. Parris does not want to believe her because he thinks that Proctor is just trying to overthrow the court. Danforth questions John about this and John denies it. Cheever tells Danforth that when Cheever went to arrest Elizabeth Proctor earlier that morning, John ripped up the warrant. Parris also says that John never comes to Church and that he has plowed on Sundays before. John is forced to defend himself against these accusations. Proctor is then told that Elizabeth claims to be pregnant and Danforth says that they have examined her and says that she shows no sign that she is pregnant. He tells Proctor that he is willing to allow Elizabeth one month in jail to see if any changes occur to see if she really is pregnant or not and if she is she will be let free for another year until the baby is born but will only do this is if Proctor drops the charges on the girls. John does not accept the deal because he knows that Elizabeth is not guilty of being a witch. He also feels bad for his friends, Giles and Francis, as their wives are in the same position as him. ...read more.

He looks at Elizabeth for a final decision, and she just says that he must be his own judge now. Herrick runs down the hall for the others to come, yelling that Proctor is going to confess. Hathorne, Danforth, Cheever, Parris, and Hale all enter. Danforth tells Cheever to start writing everything down and Proctor wants to know why. Danforth tells him that they are going to hang it on the church door for everyone to see. John does not like this idea but still carries on this the confession. Danforth asks him if he saw the Devil and John says that he did. They then bring Rebecca in to watch John. They hope that she will confess after seeing him confess. Danforth asks John if he was working with the devil and ashamed that Rebecca was watching him he still carries on and tells him that he did. Rebecca is shocked and as Danforth tries to make her confess as well she refuses and says that this is all a lie. He then asks john if he has seen anyone with the devil and john replays no and he is not happy with this as he believes that he must have seen someone with the devil. As they finally agree to let him go he tells Proctor to sign the paper and so he does but he does not give the paper back as he does not want it hung up as he does not want it to be seen by his children and rips the paper up. Danforth angrily demands for him to be hanged and with tears in her eyes Elizabeth goes to proctor and as he tells her to stay strong he gives her a passionate kiss. Herrick takes them out and Hale begs Elizabeth to go to John and try to change his mind. She refuses and says that he has now become found the goodness within him will not take that away from him. The scene ends and the curtains fall. ?? ?? ?? ?? The Crucible by Arthur Miller: Drama Coursework by Ardita Gaxherri ...read more.