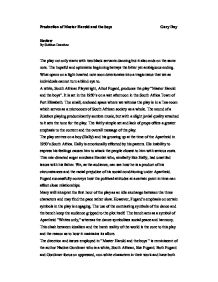 Production of Master Harold and the boys Gary Day Review

Production of Master Harold and the boys Gary Day Review By Siobhan Donohoe The play not only starts with two black servants dancing but it also ends on the same note. The hopeful and optimistic beginning betrays the bitter yet ambiguous ending. What opens on a light-hearted note soon deteriorates into a tragic issue that we as individuals cannot turn a blind eye to. A white, South African Playwright, Athol Fugard, produces the play "Master Harold and the boys". It is set in the 1950's on a wet afternoon in the South Africa Town of Port Elizabeth. The small, enclosed space where we witness the play is in a Tea-room which serves as a microcosm of South African society as a whole. The sound of a Jukebox playing predominantly sombre music, but with a slight jovial quality attached to it sets the tone for the play. ...read more.

The bench acts as a symbol of Apartheid "Whites only," whereas the dance symbolises social peace and harmony. This clash between idealism and the harsh reality of the world is the core to this play and the reason as to how it maintains its allure. The direction and issues employed in "Master Harold and the boys " is reminiscent of the author Nadine Gordimer who is a white, South African, like Fugard. Both Fugard and Gordimer focus on oppressed, non-white characters in their work and have both been influential as political opponents of Apartheid. This play echoes many aspects of Fugard's life. Not only was Fugard nicknamed 'Hally' as a youngster. The play is also semi-autobiographical, it's actually based upon a key event in Fugard's own life. Hally mirrors a young Fugard when he spits in the black servant's face after a heated argument. Fugard's relating of his own life experiences and lessons through Hally allows deeper empathy with the tragic character of Hally. ...read more.

His powerfully controlled deliverance of speeches establishes the wise and composed character of Sam. Obano's poignant line "Dirtier than I've ever felt in my life" not only maintains the power of the issue being addressed but it also lingers on in our mind as a pitiful reminder of the racial conflicts that are still present today. There is a definite imbalance of attentiveness through the course of the play. The first hour can seem tedious with the tiresome conversations and the absence of any real action occurring. However, as we reach the climax of the play the intensity is heightened as Hally's ingrained racism surfaces resulting in an array of anger, frustration and resentment. This sudden burst of energy is certainly transfixing but does not receive its desired effect due to its lateness in coming. When the play has finished there is an air of frustration in the room. Afterall, has Hally truly learnt anything or gained any form of wisdom after the years of tutoring and friendship from the boys? This is where the real frustration lies. ...read more.