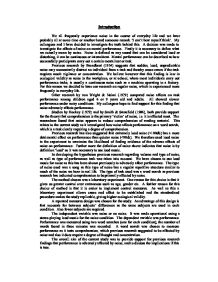 Provide support for previous research findings that performance is adversely affected by noise, and to discuss the implications if this is true.

Introduction We all frequently experience noise in the course of everyday life and we have probably all at some time or another heard someone remark 'I can't hear myself think'. My colleagues and I have decided to investigate the truth behind this. A decision was made to investigate the effects of noise on mental performance. Firstly it is necessary to define what we actually mean by noise. Noise is defined as any sound that can be considered loud or disturbing, it can be continuous or intermittent. Mental performance can be described as how successfully participants carry out a certain mental test or task. Previous research by Broadbent (1954) suggests that sudden, loud, unpredictable noise may momentarily distract an individual from a task and thereby cause errors if the task requires much vigilance or concentration. We believe however that this finding is low in ecological validity as noise in the workplace, or at school, where most individuals carry out performance tasks, is usually a continuous noise such as a machine operating in a factory. For this reason we decided to base our research on regular noise, which is experienced more frequently in everyday life. Other research by von Wright & Nuimi (1979) compared noise affects on task performance among children aged 6 or 9 years old and adults. All showed slower performance under noisy conditions. My colleagues hope to find support for this finding that noise adversely affects performance. ...read more.

In the 'no noise' condition subjects were asked to complete the questionnaire in silence. In each condition the experimenter handed out a word search to each participant face down. Once each participant had a word search the instruction was given to begin and a timer was started. After three minutes the instruction was given to stop. The word searches were then collected in. A note was also made of the number of males/females partaking. After the experiment all subjects were fully debriefed on what the experiment was investigating and thanked for their help. Control Measures * Each word search contained 24 missing words in total so the maximum possible words that could be found were the same. * Two of the classes took part in the 'noise' condition then the 'no noise' condition. The other two classes took part in the 'no noise' condition first. This was in order to counter-balance to order effects, which may have been present, such as boredom or fatigue. * The music in the 'noise' condition was played at full volume in order to ensure that the condition contained noise and not just music. * The subjects were not allowed to confer whilst completing the word searches. Materials The materials used were two word searches and a music CD. The word searches can be seen in appendix A. They consisted of 24 words each. The music used was 'Everything We Do' by 'Ja Rule'. ...read more.

Additionally we also had to keep the music at a level that could not damage the subjects' hearing. Our results lend support to the theory of von Wright and Nuimi, that noise adversely affects task performance, as we found performance on a word search to be negatively affected by noise. Our findings also lend support to the findings of Hockey, 1979 and Smith and Stansfield, 1986 as we too found comprehension to be adversely affected by noise, namely comprehension of words in a word search in the present study. Our study also suggests that Broadbent's theory that sudden, loud intermittent noise can harm performance, needs to be modified to state that continuous, loud noise can be just as detrimental. The current study has implications for the safety of people working in noisy environments. For example people operating complex machinery in noisy factories may not perform adequately and mistakes made could endanger themselves and others. The study also has implications for parents. It is clear that for their child to perform optimally at homework they need to be given a quiet home environment, not a noisy one. Further study should now be carried out into other aspects of both noise and performance. Performance in real noisy conditions e.g. in a school dining hall, or performance with intermittent noise could be studied. Alternatively different types of performance could be studied, such as performance on more complex tasks e.g. IQ tests. The effects of the volume of the noise on performance would also provide a further useful insight into human behaviour. ...read more.