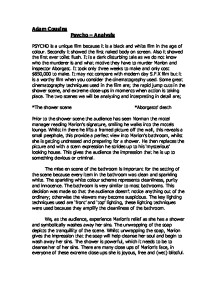 Adam Cousins Psycho - Analysis PSYCHO is a unique film because it is a black and white film in the age of colour. Secondly it showed the first naked body on screen. Also it showed the first ever toilet flush. It is a dark disturbing tale as we do not know who the murderer is and what motive they have to murder Marion and inspector Aborgast. It took only three weeks to make and only cost $850,000 to make. It may not compare with modern day S.F.X film but it is a worthy film when you consider the cinematography used. Some great cinematography techniques used in the film are; the rapid jump cuts in the shower scene, and extreme close-ups in moments when action is taking place. The two scenes we will be analyzing and interpreting in detail are; *The shower scene *Aborgasts' death Prior to the shower scene the audience has seen Norman the motel manager reading Marion's signature, smiling he walks into the motels lounge. Whilst in there he lifts a framed picture off the wall, this reveals a small peephole, this provide a perfect view into Marion's bathroom, whilst she is getting undressed and preparing for a shower. He then replaces the picture and with a stern expression he strides up to his 'mysterious' looking house. ...read more.

When the murderer has recognized that Marion has died, they leave the room promptly and in a strong manner, leaving th The audience experiences the loss and waste of life through many symbolic film techniques. Firstly, the blood that was slipping down the plughole is also a representation of her life slipping away. Secondly when she is grabbing at the shower curtain this is also a great representation of her life ebbing away. She uses her last bit of energy to give out one last cry, unfortunately she falls out the bath and dies. Hitchcock uses a very clever dissolve edit when Marion's eye stares straight into the camera, therefore straight into the audience's eye, this evokes a feeling of anguish. The droplet of water could be seen to represent a tear, she could be crying as she stole the money and escaped from the city, only to be violently murdered in a Motel. In conclusion, as the shower scene ends the camera angle zooms out of the bathroom and zooms in on the newspaper. This suggests and reminds the audience of the victim's cunning, and that she left a comfortable city life to become a thief and a fugitive. After the disappearance of Marion, Aborgast seeks to find information about what has happened to her. ...read more.

This makes the audience scared, shocked and stunned at the level of violence involved in the killing of Aborgast. When we watch the scene Aborgast is clearly treated as the victim in several ways. Firstly, when Aborgast is walking up both sets of stairs you want him to turn away and leave because you can tell he will be in danger, secondly, Aborgast is a friendly kind and helpful man, he is portrayed in this manner so that the audience become attached to him. When the audience has attached themselves to Aborgast, they want him to stay alive and out of any potential danger. Also once Marion has been murdered, the audience want the murderer to be caught and sent to prison, Aborgast should be the person that convicts the murderer, instead just when he believes he could get information from the mother he is murdered. In contrast to this we see very little of the killer. All we see is a black figure in the shape of a woman running at Aborgast. We only see this much of the murderer because it creates more mystery about the identity of the murderer. In conclusion when analyzing I have tried to show how Alfred Hitchcock created a movie classic, with a small budget he still uses great cinematography techniques which have turned a worthy novel written by Robert Bloch, into a classic 'chiller' movie. ...read more.