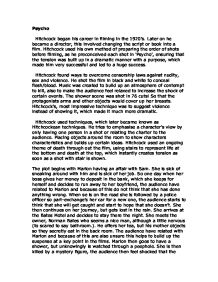 Psycho - Hitchcock began his career in filming in the 1920's.

Psycho Hitchcock began his career in filming in the 1920's. Later on he became a director, this involved changing the script or book into a film. Hitchcock used his own method of preparing the order of shots before filming, as he preconceived each shot in 'Psycho', ensuring that the tension was built up in a dramatic manner with a purpose, which made him very successful and led to a huge success. Hitchcock found ways to overcome censorship laws against nudity, sex and violence. He shot the film in black and white to conceal flesh/blood. Music was created to build up an atmosphere of contempt to kill, also to make the audience feel relaxed to increase the shock of certain events. ...read more.

Placing objects around the room to show characters characteristics and builds up certain ideas. Hitchcock used an ongoing theme of death through out the film, using stairs to represent life at the bottom and death at the top, which instantly creates tension as soon as a shot with stair is shown. The plot begins with Marion having an affair with Sam. She is sick of sneaking around with him and is sick of her job. So one day when her boss gives her money to deposit in the bank, which she keeps for herself and decides to run away to her boyfriend, the audience have related to Marion and because of this do not think that she has done anything wrong. ...read more.

He offers her tea, but his mother objects so they secretly eat in the back room. The audience have related with Marion and because of this are also unsure this helps to build up the suspense at a key point in the films. Marion then goes to have a shower, but unknowingly is watched through a peephole. She is then killed by a mystery figure, the audience then feel shocked that the main character has died. Norman finds the body and forgets about it. However Marion's sister and Sam want to find out where she has gone so hire a private detective, who leads them to the bates motel. Psycho begins with the normal (a big city.) and draws slowly into the abnormal (Norman and his disturbed mother.) ...read more.