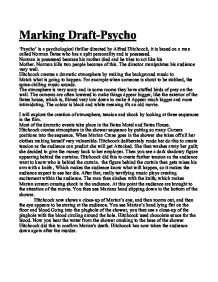 'Psycho' is a psychological thriller directed by Alfred Hitchcock, it is based on a man called Norman Bates who has a split personality and is possessed.

Marking Draft-Psycho 'Psycho' is a psychological thriller directed by Alfred Hitchcock, it is based on a man called Norman Bates who has a split personality and is possessed. Norman is possessed because his mother died and he tries to act like his Mother. Norman kills two people because of this. The director manipulates his audience very well. Hitchcock creates a dramatic atmosphere by making the background music to Match what is going to happen. For example when someone is about to be stabbed, the spine-chilling music sounds. The atmosphere is very scary and in some rooms they have stuffed birds of prey on the wall. The cameras are often lowered to make things appear bigger, like the exterior of the Bates house, which is, filmed very low down to make it Appear much bigger and more intimidating. The colour is black and white meaning it's an old movie. I will explore the creation of atmosphere, tension and shock by looking at three sequences in the film. Most of the dramatic events take place in the Bates Motel and Bates House. Hitchcock creates atmosphere in the shower sequence by putting so many Camera positions into the sequence. ...read more.

Now as Arbogast shuts the door it makes a large noise. Hitchcock does this to link it with when Norman Bates (dressed as Mrs Bates) stabs him. We then see a lot of subjective shots because Arbogast is wondering and looking at things, Arbogast then looks up at the stairs, and this is a subjective shot. As this happens the tension builds up rapidly because audience think Norman can be anywhere, they don't know where Norman is. The music also adds to the build up of tension Arbogast then quietly walks up the stairs. We see a door slightly opening and the audience's tension increases tremendously as they want to know what's happening behind the door. Arbogast reaches the top step and as he turns, Mrs Bates walks then the frightening music plays and the audience stare at the anxius to know what will happen. As Mrs Bates stabs Arbogast, Arbogast is shocked to see Mrs Bates. The music also plays when something terrible is about to happen. Arbogast thought he would see Mrs Bates. Arbogast is then stabbed and he is in shock, Arbogast is then stabbed and he is in shock, Arbogast eventually falls down the stairs. ...read more.

Hitchcock ends the movie by putting Norman in jail. After this Norman is now smiling in a evil way and the movie ends. Hitchcock does this because he wants the audience to feel scared and frightened. My favourite moment from 'Psycho' was when Mrs Bates corpse turns one hundred and eighty degrees and the audience saw all the flesh on the corpse was all gone. I like this moment best because I found that this part of the movie was the most horrifying and I was hooked to the movie. I thought the film on the whole was a very good movie especially considering the fact it was made in 1960 and the cameras where not as technical as the current ones. The movie also was very enjoyable and was easy to understand except the ending of the movie. Psycho has made me look at film a different way because next time I do a film study I know how to look at it and what to watch out for. My favourite movie would be a horror movie because they make you get into the movie quicker and it scares you. I would say my favourite movie is 'Scream Two' because it is very frightening. BY Chiraag Suchak B10AR ...read more.